Because it’s been a while.

I have all but ousted the word “sin” from my Christian lexicon, referring instead to the more palatable-sounding, “brokenness,” or the human “problem”. As a bilingual, cross cultural worker, and a writer—I believe as Christians we have much liberty to constantly re-imagine the words we use to speak of our faith in order to make our message relevant to our audience. This is evidenced by the thousands of translations of our Holy Scriptures, as people of faith diligently examine and reexamine how we can best communicate to people about God.

Words have jobs to do. They provide information, move people to reflection and action, and deliver meaning. When I was taught the word sin, it was tasked with the job of explaining the predicament of humanity, revealing a desperate need for a Savior, and point to the redemptive power of God in Jesus.

It was supposed to make me more Christ-like but it failed so I fired it. Gave it two-week’s-notice and sent it packing.

Learning about sin was supposed to teach me right from wrong, instead it made me feel morally superior.

Avoiding sin was supposed to make me holy, set me apart, instead it crippled my empathy to the stories of others.

Redemption from sin was supposed to usher in more justice, righteousness and peace, instead it made me judgmental, manipulative, and blind to ideology.

I don’t like to use the word sin because all I have ever associated with sin is abiding by a moral code: don’t smoke, don’t drink, don’t swear, don’t make out with boys, don’t watch bad movies, don’t be negative and to be nice, to do my devos, to go to church, to wear modest clothing, to memorize Scripture, to do all the right things in the right way to the right people at the right time.

Sin-Avoidance is crazy exhausting, and at the end of it I don’t see myself reflecting Jesus anymore than when I started. So I quit.

But I have discovered there are Christians who are very uncomfortable to not talk about sin. They accuse people like me to be “soft on sin” or to have no moral boundaries and sliding down slippery slopes. They say we can’t talk about Jesus without also addressing sin, that our faith is so frail it falls apart without a robust doctrine of sin.

So even though I have already kicked the word sin to the curb, I’ll invite it back for one more discussion. 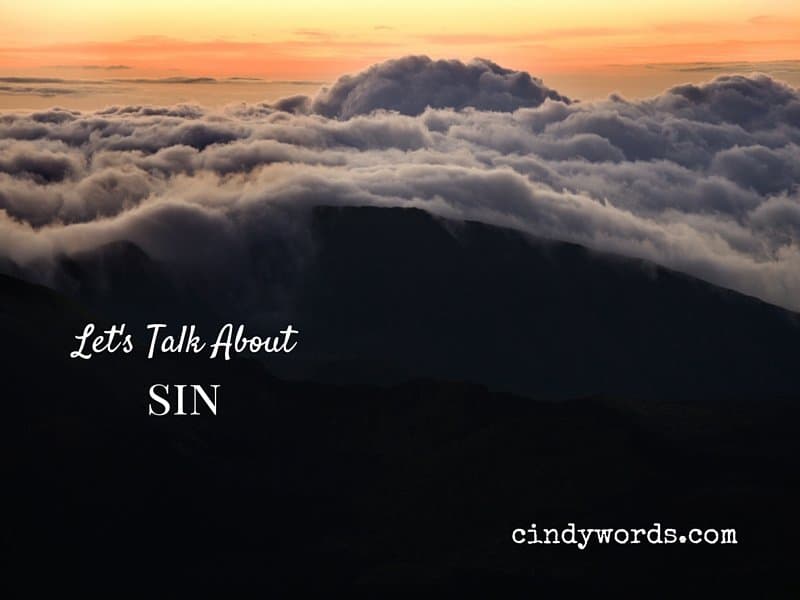 Let’s talk about sin beyond behavior modifications and moral choices. Let’s talk about the sin of our inability to live out our true selves. God made us in God’s image, the Creator of all of Universe, and yet how often we fail to allow our ability to create flourish? How often do we fail to nurture and make space for our young people to exercise their God-given creativity?

Let’s talk about the sin of complacency, of allowing our faith to remain stagnant and stale because we refuse to imagine greater possibilities and let the Holy Spirit guide us and change our ideas of our institutions, our churches, our society, and even our ideas of God.

Let’s talk about sin done to other people. Hurt people hurt people. Many times a person “sins” by being angry or vengeful but only because they have been hurt and sinned against terribly and for a long time. Yet we seem to only see the sin of the victim while being quick to forgive the perpetrator. Let’s be quick to judge sin…for abusers and tyrants and oppressors, because many of them are walking around home free, preaching in the name of Jesus Christ.

Let’s talk about collective sin. Generational sin. Systemic sin. Corporate sin. When that little boy drowned and washed up on the shore, were we talking about the gravity of our systemic, collective sin that failed him? Were there church services held to grieve and lament the depth of our violence towards that boy? Are we talking about racism, sexism, homophobia, xenophobia, environmental injustice and greed? Are we repenting each time we consume electronics borne of conflict minerals, wear clothes made in sweat shops, eat meat that ravages our planet?

Let’s talk about the sin of individualism, our profound loss of ability to listen to another person’s lived experience without judgment, agenda, and moral superiority? Look around! We are a people who know how to speak but have forgotten how to listen.

Let’s talk about the sin of power, of bureaucracy, of gate keeping, of erasing the autonomy of groups of people? Those of us who enjoy privileges and control, are we speaking about, as the Good Dr. Daniel Kirk says, our failure “to embody the story of self-giving love in our life together”?

You see, I am not unaware we have problems. I just believe our failure to live in shalom with God, with others, with ourselves, and with the earth, can no longer be adequately expressed by a word that is too neatly wrapped up with a mere list of do’s and don’ts.

A God that balances a moral ledger of sin accounting is admirable. But the Jesus I follow draws in the sand instead of picking up a stone, goes after the one while leaving the ninety-nine. My Jesus is not an Answer to a Problem, he opens up the way to using a richer vocabulary to engage the issues of our time. He pours new wine into old wineskins. He gives us permission to speak beyond traditional theologies, and more importantly, he empowers us to live it with hope.