This summer, I am launching a series featuring each of the Ten Christian Voices We Can’t Ignore from my e-book, Outside In, which you can get for free by subscribing to my newsletter here. I will be inviting guest posts, adapting parts of my book, and sharing original ideas. I hope you will follow along and consider picking up the book (for free).

Today I am excited to invite my friend Matt to share his perspective. Matt is a fellow Wheaton graduate. He lives with disabilities including visual impairment, some autism spectrum tendencies, and bipolar disorder. Matt no longer identifies as a Christian, in large part because of the radical exclusion he has felt by the church. In my book, Outside In, I propose it is crucial for Christians to posture ourselves as people who listen, especially to voices from the outside. Matt is not an “ex-Christian,” or a “non-Christian.” To me, he is an amazing human being with a poignant story to share. Please join me in hearing why he thinks people with disabilities shouldn’t go to church.

(Please note, Matt wrote this post as a play off of April Fiet’s satirical piece “10 Reasons You Should Quit Going to Church,” so even though this is more serious, it is still somewhat tongue-in-cheek.)

1.  Inaccessibility.  This really shouldn’t be on the list because it’s a reason why you couldn’t go to church, not shouldn’t. But I put it on here nonetheless because churches are behind in providing accessible facilities as well as transportation for those of us who can’t drive.

2. Baggage.  A lot of us with disabilities grew up being made fun of at church. Like all childhood experiences this went deep… and informed our view of church as an adult, perhaps making out to be a more hostile place than it actually is.

3. Being a lone wolf.  A lot of us with disabilities were the only one in our community with that specific disability (or possibly any disability at all). This makes for a very isolating road. Minorities have churches which cater to them but people with disabilities do not (because they are spread so thin geographically and have had organizational and transportational barriers).

4. Do doo doo.  Especially for males there is right and a wrong answer to the question, “what do you do?” If you give the wrong answer to this you are branded a man-fail and ignored. People with disabilities have a staggeringly high rate of unemployment and underemployment so they’re less likely to be viewed as worth engaging by church people. 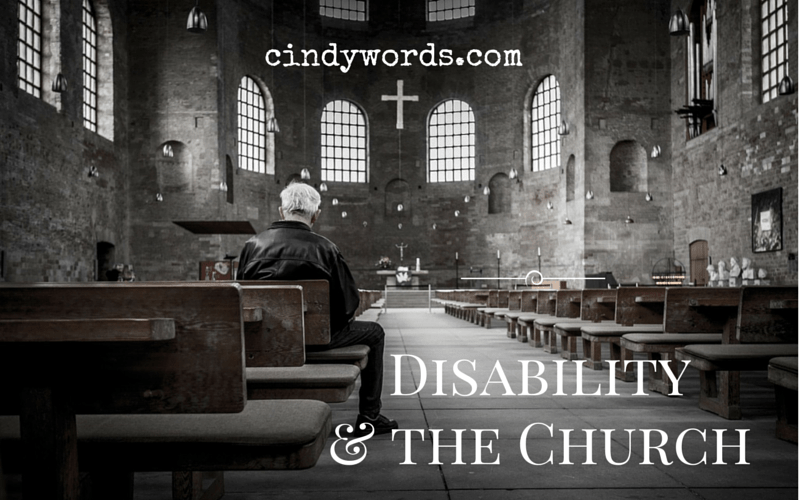 5. Singled Out.  The church in America is designed to incubate. It’s generally concerned with married people and their kids’ upbringing. If you are single (which a large portion of people with disabilities are) you are viewed as a lesser person and ignored.

6. Theology that sees individuals with disabilities as objects.  Good compassionate theology is out there but it doesn’t often make its way to the church near you. People with disabilities are sick of being seen as items of unanswered prayer or objects to project your romanticization of suffering upon. Disability needs to be celebrated and that’s something most people can’t get their head around.

7. Experience of God.  A lot of Christian teaching instructs us to take the voice of God seriously. For mentally healthy people this can be fine but for those of us who are mentally ill the results can be disastrous. The problem is, the people who have had the experience of God turn against them are so ill they aren’t in positions of power.

8. Perspectives run against the cultural narrative.  Some denominations have made great strides in racial inclusivity which is amazing. They need to build on that including people with disabilities in positions of decision making. There is a deeper problem in that prejudice against people with disabilities hasn’t abated the same way other prejudices have. This is because disability runs counter to the cultural (and dare I say Christian) narrative of youth, vitality, and prosperity. A racial minority can still ride this narrative to a place of respect.

9. Being judged based on appearance.  The internet, not the church, is the chosen refuge of those of us with disabilities. Online we escape the snap judgements levied on us in real life. Plus, geographic dispersion and transportation are no longer issues so people with specific disabilities can virtually congregate together.

10. Including people with disabilities hit people’s pain points.  Let’s face it, most American Christians are drawn to the faith through promises of comfort. These people aren’t going to turn around and remodel an inaccessible bathroom or give a ride to church to someone with a mental illness who is effectively a shut-in because they don’t have any friends.

Five Reasons Christians Should Do Comedy