A little hyperbole never hurt anyone.

The things I invest time reading, making, watching, admiring; they make me who I am. In that sense, they do change my life. I only share, because I care. Enjoy!

What is up with all the green icons for my iphone apps?! Messages, Face Time, Whatsapp, Line, and my most recent new addition: the Evernote. Now that I am blogging consistently, I needed a better note taking app so I can quickly capture an idea before it disappears into the vortex of my racing mind.  I like the checkbox button so I can make to-do lists (such a list nerd), and I like being able to incorporate images into my notes.  It’s free, so check it out!

Last weekend, husband and I enjoyed a nice overnight stay at a fancy hotel where we were introduced to shadow art by Fred Eerdekens. At first, we were idiots and like, oh messed up copper wires, we’re calling this art now? It wasn’t until hours later we discovered the shadows of the wires spell words when projected on to the wall. Thought it was pretty darn neat. 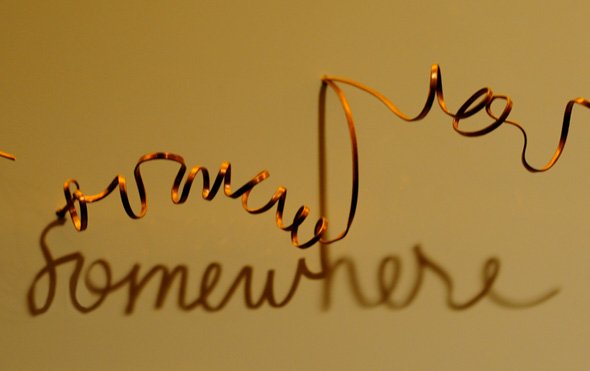 Speaking of art, repurposing trash is such a beautiful metaphor for redemption. Here, the community of Cateura, Paraguay has made an orchestra out of materials from landfill. Creating music out of literal trash. This is good stuff, guys.

More on the music front, this piano/cello duo performs the theme music from Kung Fu Panda on the Great Wall of China. Whoa. How? How did they move a piano onto the Great Wall?

Apparently, we are not to celebrate Columbus Day. According to this horrifying account of Columbus’ psychotic legacy, Americans might want to re-think the holiday.

“To love at all is to be vulnerable.” – Truth bomb from C.S. Lewis, here in cartoon-y representation.

Comfort food of the week – I made Shepherd’s Pie from this recipe. Instead of beef, I used ground pork. Instead of just carrots, I added soy beans. Instead of beef broth, I mixed onion soup mix with water (this, in my opinion, made the dish). I left out the onion, salt and pepper, but added worcestershire sauce (a lot) to the meat. It was goooood.

Anyone else watch Downton Abbey? This tumblr is hilarious. We are behind on the current season so no spoilers, please!

What changed your life this week?