Will the Truth Really Set Us Free?

One of the values my mother stressed in her parenting was honesty. She tells stories of how all she had to do was produce the instrument of discipline and my older sister would start bawling and tell the truth, with dramatic flair and embellished details. Me, on the other hand, would insist upon my lies, stubbornly enduring the swats. I was a rather proud child, and admitting to wrongdoing was far too damaging to my 7 year old respectability.

Back then, truth simply meant recounting accurate facts. After I received the gospel, truth took on a deeper significance. Becoming a Christian meant that I now possessed the truth, and as is promised in Scripture, John 8:32, truth had now set me free. During those formative years, truth became very propositional. It meant believing the right things. Growing up in Christian Culture meant becoming quite familiar with various Statements of Faith. It is a requirement in almost every Christian institution, to ensure the community ascribes to a common set of beliefs. It meant doing the right things. It turns out, the truth that sets you free meant voluntarily submitting yourself to certain rules of conduct: no swearing, no drugs, no sex (before marriage). 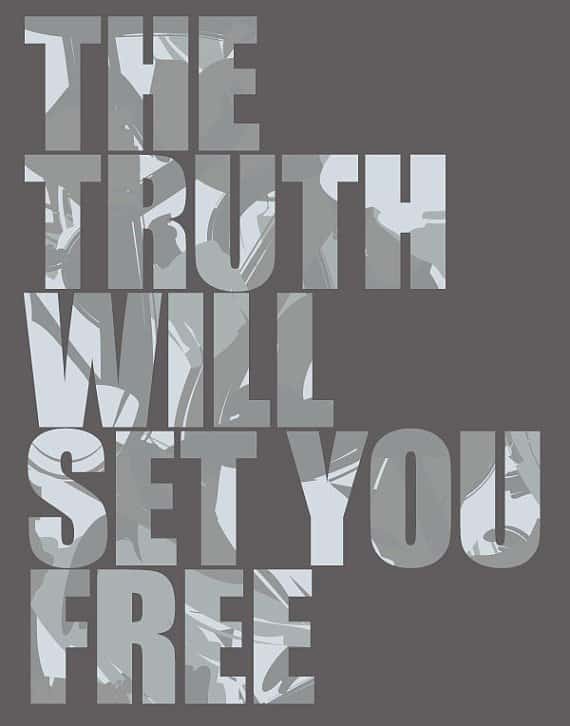 It wasn’t until my faith continued to develop that I began to see the many ways the Church wielded Truth like a weapon. A glance back at Church history quickly reveals the ways we have persecuted others in the name of Truth: for believing the Earth is not flat, for living in “barbaric” aka non-western lifestyles, and for not having the right color of skin. It became clear that those in power got to define what Truth is, and they did everything they could to ensure that power stayed in the hands of a few. Instead of being a Truth which liberates, I began to see Truth as something very oppressive indeed. I would almost physically flinch when Church people casually threw the word Truth around without context and nuance.

As I started to create using my words, I began to discover that although Truth exists, we cannot own it, but simply draw closer to it. I know I have touched upon truth when a fiery conviction drives each word onto the screen. I know I am speaking truth when I am bringing a microphone to a marginalized voice because the Truth sets free the prisoner, the oppressed, and the silenced. There is much power in words that speak truth. And yet I know my truth is only truth with a little t, a fragile, human attempt to point to Truth with a capital T.

This, I believe, is what us people of faith are entrusted with, pointing to the Truth. We have it wrong when we try to contain truth into moral documents and institutions of orderly conduct. We miss the mark when we erect walls to keep Truth inside when there is much truth to be found outside, who help us point to the Truth. We become stale and void of imagination when we impose a dominating narrative onto our stories, songs, and art, instead of organically creating art in order to draw toward the Truth.

The Truth that sets us free sets all of us free – not just the ones in power. When such truth is spoken, walls crumble and space expands for others to tell their truths.

The Truth that sets us free gently compels, nudges others to come and see. Anne Lamott says,

“You don’t always have to chop with the sword of truth. You can point with it.”

The Truth that sets us free invites questioning, dissent, and revolution; it liberates and does not silence.

The Truth that sets us free suffers alongside us, loves until it cost His life, and lives again so we might suffer, love, and live with courage and beauty.

We can tell people the Truth, but it is far, far better to live it.