Why Are Religious Children Mean?

Having written extensively on how Christian parents can raise children un-fundamentalist, this article piqued my attention as it made its rounds on the internet: Religious children are meaner than their secular counterparts, study finds.

Surveying 1,200 children from Christian, Muslim, and non religious families, the results “robustly demonstrate that children from households identifying as either of the two major world religions (Christianity and Islam) were less altruistic than children from non-religious households.” One of the methods of the survey was to hand out stickers to the children and tell them there isn’t enough for everyone in the school and study whether the children chose to share.

According to this study, it would seem that the correlation between religion and kindness is not as airtight as we would like to believe. In fact, the longer children were exposed to religion, they exhibited increasingly negative correlation to altruism.

As a Christian parent, this is disconcerting to me. How have we missed the mark on teaching our children the central biblical commandment to love? Even more troubling is our lack of self-awareness, buying into the belief that our kids are more kind than others when the evidence demonstrates otherwise?

“At the same time, the report said that religious parents were more likely than others to consider their children to be ‘more empathetic and more sensitive to the plight of others.’”

You could argue the study is faulty and biased against religion. After all, it came from a secular (gasp) source. And it is smart to critique statistics, questioning various factors and control groups and debating the implications of the findings. But from my own anecdotal experiences, despite being raised to believe it is only through Jesus that we can love perfectly, I have discovered deep empathy amongst secular friends, yes even above and beyond my Christian community.

I would be very interested in the commentary of Christian thinkers regarding this finding although I have my own theories. For one, I think fostering black and white moral thinking in young children results in them imposing rigid judgment on others. We judge others the way we are judged. If children are constantly reminded of their sin, they will become quick to see sin in others. But this assumes secular children aren’t taught right from wrong morals, which I think is untrue.

The main difference that could be the source of this altruism discrepancy between secular and religious children is the posture towards public good. 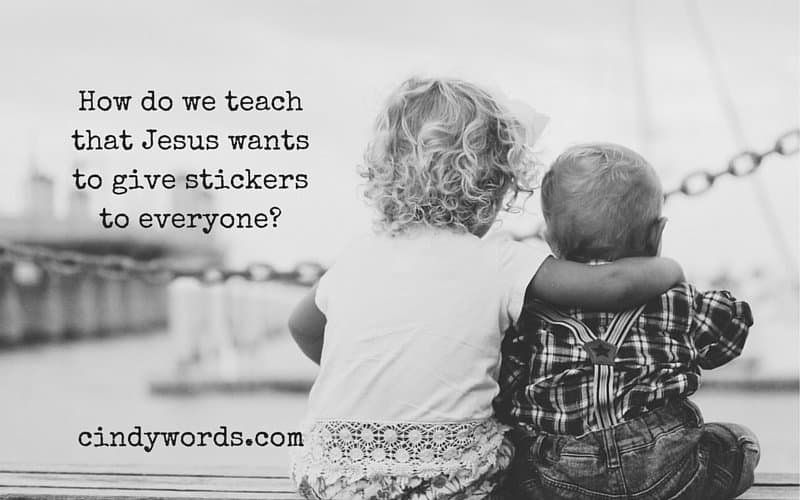 Because secular families are not bound to a community covenant or particular doctrinal commitments, their morality is characterized by common civility and tolerance. Without needing to prove the superiority of their worldview, they are free to respect and treat others the way they would like to be treated, with justice and liberty for all. On the other hand, children raised in faith traditions are taught to define their identity within boundaries, and sometimes even encouraged to evangelize others. As I have argued plenty of times before, the need to evangelize cripples our ability to listen and love well.

As Christians, we could respond to this study with skepticism or defensiveness. But I would hope our faith is not so frail that it could not be tested, especially when the subject being surveyed is the fruit, the character of our children being raised in our religious homes. Instead, I believe we should turn our attention to the log in our own eyes and examine how we could do better—how we can raise our children with more kindness and generosity.

Raising Children Un-Fundamentalist is to provide our children not only a faith based on the particularity of Jesus Christ, but also to equip them to pursue common good in the public arena. To go even further, to follow Jesus is to become the biggest champions of the common good. We have failed miserably if we present our children a false dichotomy between religious piety and pursuing social justice, equality, liberty for all.

A reduced gospel reserved only for salvation in the after life misses out on the work of living out good news for people right now. As Rob Bell says in his recent youtube video on the definition of the word, Evangelical:

Working out our salvation and instilling a life of faith in our children isn’t about executing rituals with precision. It isn’t about teaching them to pray eloquently, or to get them to obey without question. It isn’t to give them the letter of the law so they can judge the world with a heavy-handed measuring stick.

It is to form and shape their identities into one oriented towards justice and beauty in our world. It is to open their eyes to the realities of oppression and suffering. In a world where there isn’t enough stickers for everyone in the school, how can we invite the children into the struggle for equality? How do we teach that Jesus wants to give stickers to everyone? If it isn’t good news for everybody, it isn’t good news for anybody. How can we place sticker-sharing to such high priority that it becomes embedded in our children’s psyche, so that kindness is instinctual?

May our children then parallel secular peers in generosity and love. More importantly, may the children of our generation inspire us, the adults, toward greater mercies for the suffering.

May love win, justice roll, and the moral arc bend toward the right direction, so we can hold witness to the transformation of communities for good.