I hate to perpetuate tired Asian stereotypes, but like many of my Asian friends, I was raised with the mentality that becoming a successful human being entails becoming a doctor, or at least marrying one.

The first time I passed out at the sight of a needle, I palpably felt the burst of that dream bubble in my mom’s head as she helped carry me to bed. If Chinese mothers from the 80s knew how to text, she would definitely have been dejectedly SMH. (Shaking My Head)

Squeamish at the sight of needles and blood, crying out of compassion for the dissected frog in Biology, the path of science was not going to be for me. I would not have objected to marrying a doctor, especially the likes of Dr. McDreamy or Dr. Avery Jackson from Grey’s Anatomy, but that proved to also be outside of my fate.

I liked the humanities. I like stories, the abstraction of ideas, and the profound mysteries in the study of God. I enjoy human interaction more than deciphering formulas. I prefer pondering existential questions over solving an equation.

I am a nerd for words, valuing artistic creativity over the precision of math and sciences.

But lately, something is drawing me towards the discipline of science.

Part of the reason is that our world is becoming increasingly dependent on technology for survival. Math and sciences are the language of the future. The most marketable skills for the next generation are those who are versed in computer code, who have engineering prowess and technological know-how. The United States, finding her students lagging behind other countries in math and science test scores, is scrambling to rectify the situation in order to stay competitive. To combat growing global challenges such as climate change, it is crucial for humanity’s survival to be eloquent in math and science to innovate solutions. I feel it is my responsibility as a global citizen to stay abreast of the latest scientific findings to help us live more ethically for ourselves and future generations. 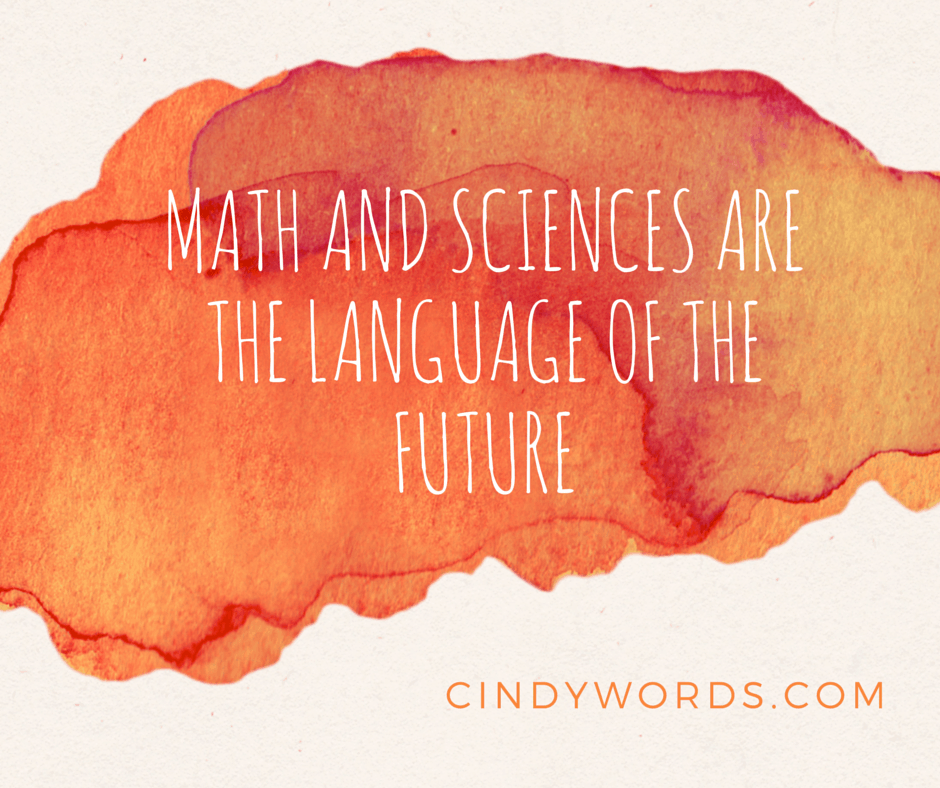 The other reason is the way my faith journey has progressed. I write here that at some point in my life of faith, I grew dissatisfied with rote answers and dogmatic certainty of our view of God. I became acutely aware of a deep drive within me to continue searching for God instead of assuming I have already found God. I say this,

I want to shed a million different lights on the image of Christ. I want the astronomers to go further out into the wide expanse of space, and the biologists to discover even more minute units of being.

I am in the process of shedding the theological arrogance that comes with certainty of faith and the unexpected byproduct is an intense curiosity in the way the world operates beyond the lens of the humanities.

The other day I came across the concept of Quantum Entanglement, which from my very limited understanding, is the physical reality that two particles separated by space operate as the same object, so that what affects one affect the other simultaneously.

It blew my mind and intrigues me to no end. How is that possible? Do we experience quantum entanglement in our everyday lives, where and how? What are the possibilities of harnessing QE in the future? What problems could we solve with it? I love the freedom and permission to ask questions in science.

It is incredibly unfortunate that culture wars have driven a wedge between the scientific community and the church, setting up false binaries between science and God. There have always been scientists who are deeply invested in matters of faith, as well as scientists who are militantly atheist. There should never have been a choice between becoming a good Christian and a good scientist; being one doesn’t negate the other. They aren’t mutually exclusive categories.

At the core of both science and theology is the exercise of human beings doing our best to figure things out. Margaret Wertheim, a science writer who cofounded the Institute For Figuring says on the podcast OnBeing, that the word ‘figuring’ immediately connotes art, science, mathematics, and cognition. Figures are numbers and scientific diagrams; it describes our bodies, and is a verb for the act of knowing.

Our faith is an embodied faith, and theologizing is an act which engages our minds, bodies, spirits—a holistic endeavor to pay attention to and articulate our relationship with God. As well the sciences, while using tools of the right brain, strike at our spiritual core. When a theory is proven, experiments demonstrating that something works exactly accordingly to a formula every single time, I imagine the scientist experiences nothing short of transcendence and awe.

I guess what I’m trying to say is that there is beauty to be found in both the sciences and humanities, and I’m drawn to all beautiful things. What is clear about both these disciplines is how unclear they are. It seems to me, that the more expert and nuanced and precise the academic study develops, the more one uncovers deeper mysteries to explore.

And that inspires me, not just intellectually or spiritually, but because the humbling notion that we know so much and still have so much more yet to learn is both mind blowing and comforting at the same time. Like an adolescent at the brink of adulthood, we are all grown up and yet still have a world of adventures before us.

It turns out, the act of figuring out what it means to be human, is precisely what makes us most human.

In my book, Outside In: Ten Christian Voices We Can’t Ignore, I devote a chapter to discussing how we must make room in the church to integrate academic disciplines such as science into our faith. You can subscribe to my newsletter and get the book for FREE.