The biggest event of Hollywood industry has just wound down. The rich and glamorous have walked down the red carpet in their designer gowns, the famous people took home trophies, and the Oscars are over for another year.

It is a lot of fun to ooh and aah over celebrities. I love to dole out opinions on red carpet fashion choices and chuckle at twitter making fun of Matthew McConaughey’s facial hair. But overall, I think celebrity culture is quite unhealthy. Too much power and fame seems to corrupt even the best of us, and being in the spotlight for too long takes its toll on the human psyche. We should be fostering meaningful relationships with one another instead of developing a system which makes possible for the Celebrity to crave constant attention and for the Crowd to follow blindly in an unthoughtful, mob-like fashion.

But because the system is already in place, this mechanism within culture to put people on pedestals for us to blindly adore – when Christians begin to share art and ideas publicly, we have seamlessly co-opted the same model to create a niche Christian Celebrity Culture.

“Christian Celebrity” is an outrageous term. We should be disturbed with the concept of Christ-followers becoming people who are worshipped and idolized. It is an oxymoron for people who are called to give away power to be placed in a position of power. It is irreverent to consider those who celebrate weakness in Christ to be wielding strength. It is dissonant for citizens of an upside down Kingdom to be ruling from above. Calling a Christian a celebrity is like calling a pauper a prince. You can only be one or the other, not both. 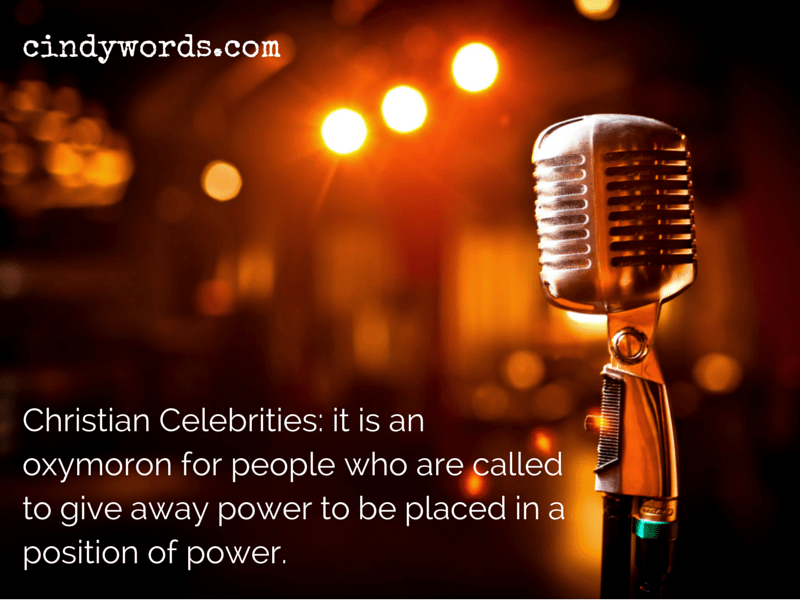 But Christian celebrities exist. Many of them are, by definition, wildly popular. As a Christian blogger, I even interact with some of them on social media. (For the record, I consider someone to be a celebrity if they have say, over 10K followers on Facebook or twitter.)

Just as the rain falls on the just and unjust, the unhealthy ills of celebrity culture infect Christendom as well. Sex and corruption scandals occur in powerful Christian leaders because their appetite for influence causes them to lose their way. Abuse is hidden and brushed aside for the sake of maintaining an untarnished image. Public platforms in conference circuits are repeatedly given to a handful of celebrities for their name recognition rather than skill, while qualified people are discarded because they aren’t famous.

Somehow these vices are more insidious because they are done in the name of Jesus, our God who told story after story about forsaking everything to cherish the one forgotten sheep, or coin, or child.

I’m not pointing fingers at Christian celebrities. Many have worked diligently to achieve their success, and some of them are my friends. But I think celebrity culture hurts both the celebrity and the crowd. It dehumanizes the culture creator into a consumable good instead of a fellow human being. Standing on a platform means bearing unrealistic expectations of perfection. And it strips the crowd of the dignity to think for ourselves, because loyalty to a brand demands the crowd to consume the product without discretion. I am lamenting the fact that we seem to be helplessly caught up in this entangled web that tightly weaves faithful Christian living and celebrity culture.

I don’t know how we can break this addiction to celebrity culture, but I think recognizing and repenting of it is a start.

“My name is Cindy, I am addicted to celebrity culture.” I follow the most popular Christian leaders and believe they can do no wrong. I criticize and judge them on the basis of their work, without consideration for their value as fellow children of God. Listening to their influential voices causes me to overlook my ordinary brothers and sisters who are quietly leading by faithful words and deeds.

I need to repent of my complicity in celebrity culture as an active participant in it.

I also need for our Christian celebrity leaders to help us take a prophetic stance against this toxic entanglement.

Christian leaders, show us what it’s like to live in this world compelled by faithfulness and not by fame. We don’t want you to hide your talents in false humility, but to bravely live out your life with more conviction and less ego. We want you to achieve success, but the way you get there matters: the ends do not justify the means. And when you do get there, however that is defined (10K followers?), please exert every energy to break us out of this mold of celebrity madness. Pursue the upside down kingdom by magnifying small voices, giving platform to lesser known Christian speakers. Advocate loudly and persistently for silenced people. Let go of ludicrous book deals and TV spots to serve the marginalized.

In this and other creative ways show us how to be more Christian than Celebrity.