Jesus Isn’t a Pill and My Pills Aren’t Saviors

This post is part 7 of my Summer Series featuring each of the Ten Christian Voices We Can’t Ignore from my e-book, Outside In, which you can get for free by subscribing to my newsletter here. I will be inviting guest posts, adapting parts of my book, and sharing original ideas. I hope you will follow along and consider picking up the book (for free).

One of my Ten Christian Voices is the voice of those who suffer mental illness, which I argue has been an invisible disease marginalized by church culture. In my book, I quote R.L. Stollar, who speaks articulately and intelligently about the subject. Today, I am honored to have him share a vulnerable personal story of his own struggle. It is a hard read, but I hope you’ll find well worth it.

The last thing I remember was throwing back a handful of medication.

When I came to, I was in a hospital, laying on a bed, crying, being held involuntarily. As the pieces of the evening before came together, I found out that I had taken too many pills, blacked out, left home, drank alcohol, became suicidal, and was taken to the hospital by local police to ensure my safety. I don’t remember any of that. All I remember was feeling overwhelmed with anxiety and depression and taking the medication.

Everything after that became a blur.

There are two senses in which Jesus and mental health medication are the same. The first is that they are both suggested to cure mental illness. In fact, certain Christians and American churches even equate the two: “Jesus is my happy pill.” “Church is the best anti-depressant.” “Prayer is my Zoloft.” “Just repent and you’ll feel better.” “Mental illness is the result of the Fall.” “Ask Jesus into your heart and then there’ll be no more room for depression.”

The second sense in which Jesus and mental health medication are the same is that sometimes both are inadequate.

I asked Jesus into my heart when I was around 5. My older brother prayed the Sinner’s Prayer and secured his golden ticket to Heaven. I remember realizing that if he went to Heaven and I didn’t, I would forever be separated from my brother. Out of sheer terror and the fear of being alone in a lake of fire, I, too, accepted Jesus as my Lord and Savior.

As I grew older, became a teenager and then an adult, I had numerous, stereotypical “reconversion” and “re-commitment” moments. Such moments were always accompanied by similarly stereotypical soundtracks: the guilt-inspiring altar calls and emotionally manipulative worship music played at summer camps. I’d feel like I “backslid” and had to pray the Sinner’s Prayer again. And again. And again.

Until one day I realized that the cycle of me “backsliding” had an uncanny parallel to the cycle that — now as an adult — I realize is my cycle of mental illness. Thus as much as I prayed those Sinner’s Prayers and as much as I’d ask Jesus into my heart again and again, I was still left with my depression. Jesus wasn’t big enough to crowd it out, because Jesus isn’t a cure of mental illness.

But honestly, neither are my pills.

I remember when I was younger I watched the Zoloft commercial with the sad blob. I related to that blob. I felt just like it. And when it took Zoloft, it looked so happy — just like I was promised good Christians who invited Jesus into their hearts would feel.

I was a bad Christian, but maybe — just maybe — I could at least be a happy blob.

The very first anti-depressant I took sent me to the ER room. I was allergic to it. Within a couple hours of taking the first dose, I was violently shaking. So it was off the ER. Not an auspicious start.

It’s now been over 5 years since I started taking anti-depressants. I have yet to find one that works. I have found plenty that, like churches I have attended, offered false hopes and empty promises and delivered only stomach aches and diarrhea. The good news is that at least I now know what to avoid.

The bad news is that sometimes things get worse before they get better.

Sometimes you have to go through disillusionment with God and God’s church and the empty promises of God’s followers before you realize that Jesus isn’t a pill to make you happy. My depression is not a sin and it is ok and it is part of me and Jesus loves me, depression and all. I hate my depression but it has made me a fighter and I will keep fighting. 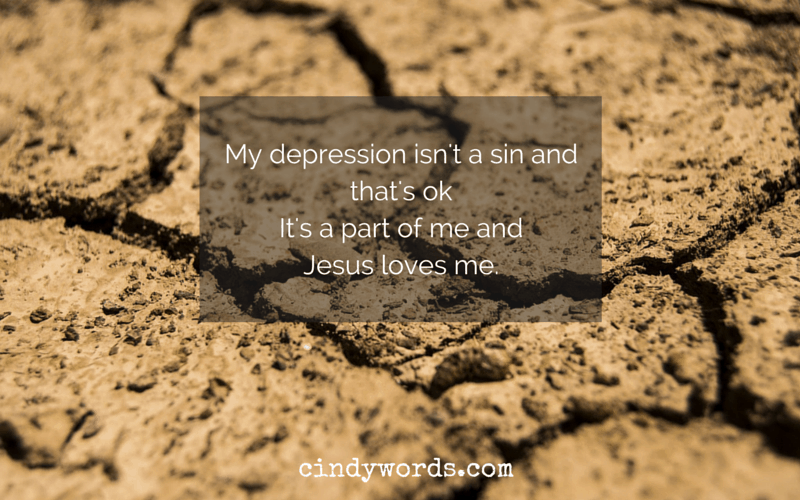 And sometimes you have to go through disillusionment with doctors and their medicines and the empty promises of pharmaceutical companies before you realize that you might be stuck with your depression for the rest of your life. You might not be — and I hope you aren’t and I hope I’m not, either — but I’ve taken Paxil and I’ve tried Lexapro and I’ve swallowed Zoloft and I’m still the sad blob, not the happy one.

I’m still searching and I’m still fighting — both with Jesus and against my depression. I’m still trying new medications and I’m still sending prayerish thoughts like drunk texts up to Jesus. But that’s the stuff of life.

I hope the American Church can some day know this life-stuff, too. I hope the Church will stop selling Jesus as snake oil. I hope that one day it’ll just come alongside people like me — people with depression and anxiety and suicidal thoughts — and just be there with us and for us for the long haul. It’s not easy and maybe it will never be. But a faithful, enduring presence is at the heart of the Church’s call to follow Jesus.

When I came to in the hospital that one morning, I knew — yet again, maddeningly yet again — the faithful, enduring presence of my mental illness. Yet even more than my mental illness, “more than watchmen for the morning” (Ps. 130:6), Hope is faithful. I hope and pray the Church will be as well.

Bio: R.L. Stollar blogs at Overturning Tables, where he writes about American Christianity, child liberation theology, mental health, and advocacy for abuse survivors . He is the Executive Director of Homeschool Alumni Reaching Out (www.hareachingout.org), a non-profit organization dedicating to developing partnerships between homeschooling parents and alumni to make homeschooling better for future generations. Ryan was homeschooled from preschool through highschool. He has a B.A. in Western philosophy and literature from Gutenberg College in Oregon and a M.A. in Eastern religions from St. John’s College in New Mexico. His graduate essay on the Dao De Jing won him the Eastern Classics Essay Prize from the Graduate Institute at St. John’s College in 2006. Ryan is also a Board Member at the Coalition for Responsible Home Education (www.responsiblehomeschooling.org). You can follow him on WordPress at https://rlstollar.wordpress.com or on Twitter at @rlstollar.

Five Reasons Christians Should Do Comedy (Too Funny)

Procrastinating Until Marriage (Too Single)

Too Smart to be Christian (Too Smart)

Interview with Unvirtuous Abbey (Too Digital)