Is Evangelism to Minors Predatory…or Not? 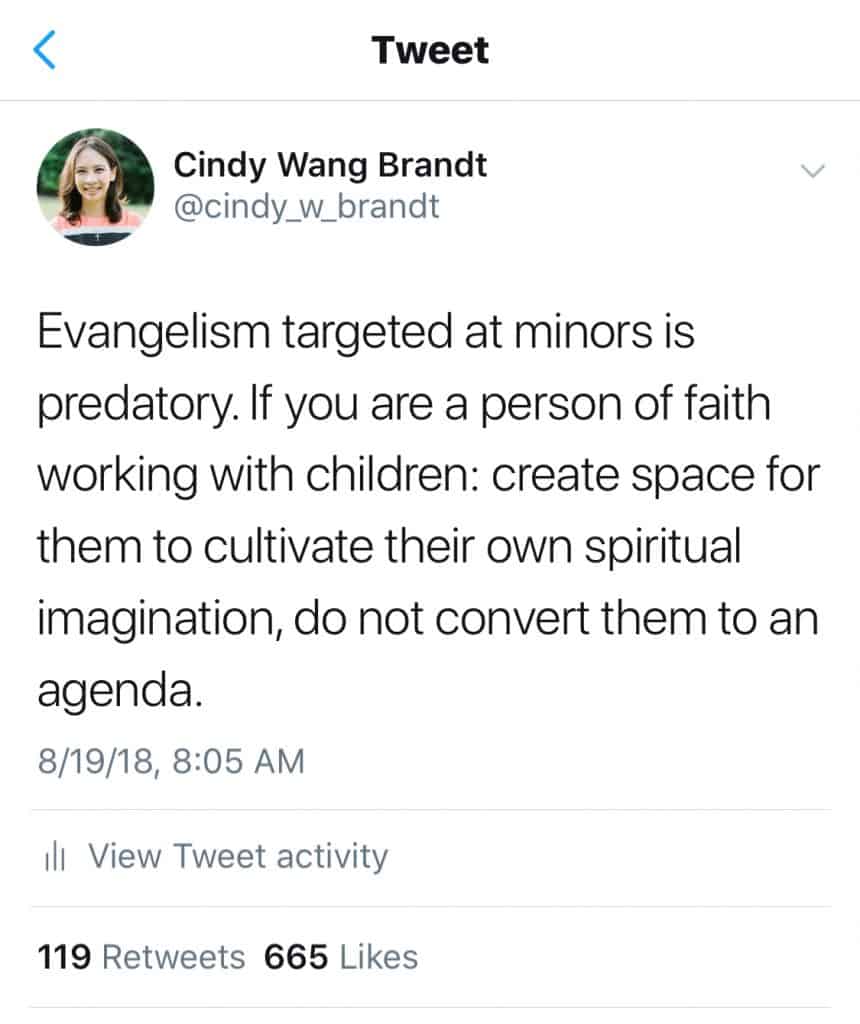 This tweet went far, inviting lots of support and pushback. Here, I want to engage further with more nuance over a topic that is close to my heart.

I was evangelized as a minor. My parents sent me to a school for missionary children here in Taiwan, in hopes of providing me a quality western education, with a philosophy of learning that suited their values for us. They were not Christians at the time, and were not familiar with the inner workings of Christian subculture nor the evangelism tactics used to “reach children for Jesus.” These included:

Some of these teachings are spiritually abusive and in my opinion, very harmful to a child’s healthy emotional and social development.

What made these evangelism tactics even more egregious is that they are done beyond the purview of parents, many of whom are secular or hold other religious beliefs.

Even though the school makes it clear that they teach a “Christian worldview,” the reality is that many of these parents are seeking a quality education for their kids and are simply trusting the system will provide the children what is best and not what harms them.

This is also true in other places like VBS, or Christian after school programs, etc. Parents send their children to these things in hopes of giving their children good entertainment and moral teaching, and sometimes even out of desperation for affordable childcare.

In other economically destitute countries, missionaries literally offer life-giving food and aid, in exchange for the opportunity to evangelize children.

I think these acts of evangelism are predatory because:

Evangelism using coercion, violent stories, and wielding economic and cultural power over parents of children is predatory. I stand by my tweet.

Photo by Charlein Gracia on Unsplash

Does this mean, then, that anyone of faith who tries to share their faith values with children, are being predatory? According to Pew Research Center, 84 percent of the world population are religious, and it can be assumed the children are being raised with the teachings and rituals of their family’s tradition. Are 8 out of 10 people in the entire world treating children unjustly?

First, I want to say it’s a fair question to ask. Just because “everyone is doing it” doesn’t necessarily make it right, does it? Indeed, if families are coercing their children with similar fear tactics I’ve listed above, I would advocate against it. Fundamentalism exists in every religion and I condemn authoritarianism in both religious and cultural practices on children—children deserve liberation and autonomy.

Having said that, I don’t believe it’s possible to raise children in a vacuum void of values and practices. It simply doesn’t exist—children are flesh and blood embodying and navigating their minds and spirituality in a myriad of ways from the day they take their first breath.

Children are curious about transcendent matters of life–who we are, why are we here, why is there suffering, where do people go when they die–honoring their questions is respecting their spiritual autonomy. The best thing religion can do for children is to provide them the language and tools to navigate these questions and exercise their inherent spirituality.

The key difference between predatory evangelism and providing a toolbox to express inherent spirituality is the locus of control. Evangelizing children puts the control with the adults to manipulate, to determine the agenda and dictate the outcome. These attempts either fail utterly (children stop believing when they grow into adults) or they inflict damage (as is my story, in which I’ve had to heal from unnecessary pain.)

But when we give children agency over their own spirituality, and provide them a multiplicity of opportunities to experiment with their own ideas and imagination about what it means to be Jewish, Muslim, Christian, Buddhist, or whatever your family faith tradition may be, they are the ones in control.

Furthermore, they are in a position to enrich our faith! Our passing on of values and rituals becomes a scaffold that eventually falls away so that we are truly mutual partners in the journey of faith.

Don’t be afraid to tell your faith story to your children—just make sure that they have every right and freedom to live their own.