Irreverence is the New Reverent

Faith: the dealing with the meaning of life, the matter of eternal salvation, the bedrock upon which we build our families and society, this is serious stuff. Irreverence, by definition, is a lack of respect for that which is serious. It would seem that finding faith in the irreverent is impossible, like searching for the sun in the dark of the night.

Irreverence permeates pop culture. From HBO shows filled with crude nudity and violence, to musicals such as “The Book of Mormon” where explicit ratings are applied to almost every song, to late night comedies featuring popular show hosts like Jon Stewart and Colbert, who play-acts a persona speaking exclusively in snark.

The Church, by and large, keeps irreverence at arm’s length. Sure, some pastors like to open sermons with a couple of clean jokes, but that’s about the extent humor interacts with the Faithful. While I agree there’s a social maturity required in expressing irreverence through appropriate channels, the Church is missing out on a deep authenticity of the human experience if we continue to fear irreverence, instead of finding beauty in it.

There has been an emergence of irreverent Christian leaders. One example is Nadia Bolz-Weber, the heavily tatted, foul-mouthed pastor of a Lutheran Church in Denver made headlines in the Washington Post and whose book, Pastrix, is a New York Times Bestseller. Another popular blogger who has garnered a growing community online is Jamie the Very Worst Missionary, whose voice contains crude humor, and who quoted God as saying “shit” in her recent blog post. Facebook Pages which have amassed huge followings include the “Unvirtuous Abbey”, “Stuff Christian Culture Likes”, a page which exists solely to brutally mock Christian Culture. Indeed, even “God” has a Facebook Page used not so much to lead a flock, but to inject daily doses of humor.

As one might expect, these snarky leaders are not without their critics. There are people who are wary of what they are doing to the cause of Christ. See for example, this tweet from pastor Jarrid Wilson, who has garnered a large twitter following: 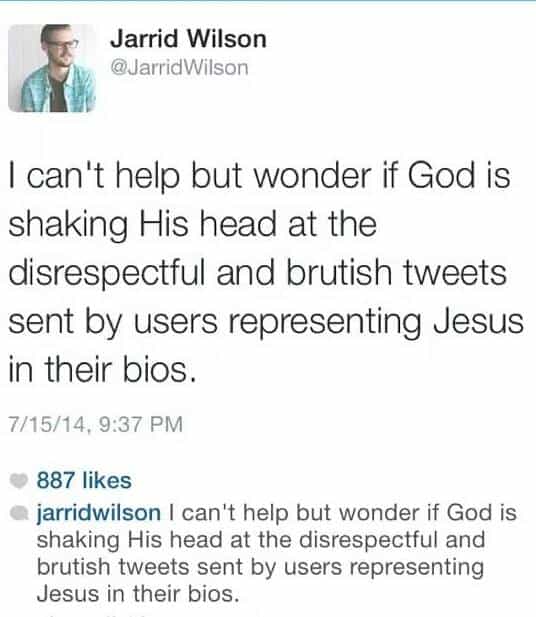 It is this fear of irreverence that I believe deprives the Christian community from learning what it really means to be faithful. Irreverence shows the world how to be real, prophetic, and passionate.

Irreverence says it like it is. It’s the child who calls out the emperor has no clothes. It’s the uncouth teenager who wears his boredom on the outside. It’s the hippie activist who won’t shower until world peace reigns. Irreverence gives the Church permission to engage in full blown lament amidst the hardships of life. As I have written elsewhere, learning from the popular and unabashedly irreverent comedian, Louis C.K., we cannot shut down feelings of true sadness with reverent calls to thanksgiving and praise. In order to enter true covenantal relationship with God, we must have the freedom to use the wide range of emotion given to us in our humanity to express what is real to our human experience. Instead of flinching from irreverent curses directed at God, let’s listen closely to the deeper pain of struggle, because that which is real, even when delivered in coarse language, is human, and therefore deserves to be heard.

Irreverence is prophetic. Satire has long been used as a tool of social commentary, from the French Enlightenment writer, Voltaire, to the great American author, Mark Twain, humor has been wielded as the sword of truth. Sarcasm, though irreverent, deftly draws attention to the ills in society we have numbingly accepted as normal. In order for humor to be effective, it points out that which is true and ridiculous at the same time, so the audience ends up simultaneously slapping our knees and nodding our heads. We laugh, and then we are sobered and moved to action. I tune in to the Daily Show, to relax and have a good time, but also to uncover the nuggets of truth buried beneath the dripping sarcasm. The puns targeted at politics, religion, civil society serve as a prophetic beacon call to make the world more just.

Irreverence is passionate. It has been said the opposite of love is not hate, but apathy. Sometimes irreverence is laced with hate and cynicism. People who have been hurt by religious institutions need a season of reacting to their wounds. But their rants and ravings are healthy signs they are still using their voice. The creator of Stuff Christian Culture Likes, Stephanie Drury, has a policy of never deleting comments on her page precisely because she sees value in those voices. It’s messier, harder to control, mistakes are made and repeated, people are hurt and not easily mended, but they are never, ever silenced. Space for irreverence allows for dissenting voices and prevents abuse from those in power. It gives people time and freedom to figure life out.

The question isn’t how we can find faith in irreverence but how we can find faith without it. Without questioning, doubt, and calling out what’s real, how can faith be truly genuine? Doubt isn’t an absence of faith, but her fairy godmother. She always lends a listening ear, urges you to second guess what is real and magical,  and compels us to hope despite uncertainty. Faith without doubt lack whimsy, imagination, and vitality. The irreverent help us walk our spiritual journey with firmer footing to explore the boundaries beyond institutional faith.

We may yet find the greatest reverence in the irreverent.