This post is part 5 of my Summer Series featuring each of the Ten Christian Voices We Can’t Ignore from my e-book, Outside In, which you can get for free by subscribing to my newsletter here. I will be inviting guest posts, adapting parts of my book, and sharing original ideas. I hope you will follow along and consider picking up the book (for free).

If you are edgy, pop-culture obsessed, Jesus-loving, and sometimes interpret the scriptures through 80s music, then you probably already know the popular Twitter-based community: @UnvirtuousAbbey. Aaron Billard is a United Church minister as well as the snarky tweeter behind  @Unvirtuous Abbey. Prayers uttered at UA include:

Placing her in their midst, they questioned him about stoning such a woman. Jesus straightened up and said, “Nobody puts Baby in a corner.” @UnvirtuousAbbey

Your iPhone battery died for your sins. @UnvirtuousAbbey

When asked why there was only one set of footprints, Jesus replied, “It was then that I unfollowed you.” @UnvirtuousAbbey

I consider myself a “monk,” a faithful follower of the Unvirtuous Abbey, because I believe Irreverence is the New Reverent and that humor is a fruit of the Spirit. In my book, Outside In, I explore the dynamics of our lives online and how the ministry of the church is shifting toward social media. Aaron ministers both in a physical context and through creating this virtual community (Twitter following: 30K+, Facebook Page: 40K+), so I am delighted to interview him on this topic. Hope you enjoy our conversation!

Describe Unvirtuous Abbey. What sort of digital setting are you imagining when you tweet out prayers?

It’s like eavesdropping on a chapel service where there are windows featuring Optimus Prime and Mr. Rodgers. I imagine there’s a statue of Yoda in one corner, and candles lit at the chapel entrance where people intercede for Dolly Parton and pray to live long enough to see the next Star Wars movie. It’s very unvirtuous. It’s like sneaky religion. We are seriously un-serious.  Humour is a gateway grace to God, much like coffee. When I laugh, I feel closer to the divine.

What do you love about Unvirtuous Abbey, and what are the challenges?

I once tweeted asking if anyone wanted to have a group meet up for those who follow Unvirtuous Abbey. Fifteen strangers showed up, and by the end we were giving hugs and following each other back on social media. It is fun when people want to meet you and getting to meet them. For me, it has made the church a smaller and friendlier place. A lot of content on Unvirtuous Abbey is submitted by people who follow it. And that’s what makes it great.

On the other hand, it has exposed me to criticism the likes of which I have never experienced before. Several times, I have had to walk away from it for a few days, or talk myself out of deleting it altogether. I remind myself that Jesus loves online trolls too.

Do you think it’s possible to minister in a meaningful way online?

Absolutely. Many people are much more “at home” on the internet than they are in some church building. I would like to offer them a Jesus that says, “You are with me.” Or a religion that can dialogue with atheists. Or, even more basic: a smile, a chuckle, or a big laugh. I want to remind others that as complex as theology may be, at the centre of it are human beings doing all they can to put words in God’s mouth, and we would do well to remember that.

When people connect with that message of Unvirtuous Abbey, when they see the humour in it yet also the seriousness to it, it creates a relationship. I have met amazing people through Unvirtuous Abbey who are now part of my collective. I have had lengthy conversations with hurting strangers. I have also been ‘ministered to’ by people with different or no religious traditions.

In a way, my thinking has evolved about online ministry just as it has about friendships made there. They are real, they are meaningful, and they are life giving. So why can’t ministry happen there too?

When something is posted, I read all of the responses, and so do other people. And we all respond to each other. What’s interesting online is when people tag friends or relatives in the post or retweets it. It opens the conversation to other people in ways that just can’t be equaled in a church.

Go to the world.

How can face-to-face relationships and social media fans both function as church?

I have often said that the one thing that I love about church is that it asks me to sit in a room with a group of people that I wouldn’t otherwise meet, or wouldn’t have anything to do with. It doesn’t ask me to like them, instead, it asks me to love them. I have met some of the most interesting (and the most infuriating) people. It demands that I shake hands and make conversation with them—to help them and let them help me.

This can be true of in-person and online ministry. Of course, online you can block or unfollow. But, you can just as easily quit a church. 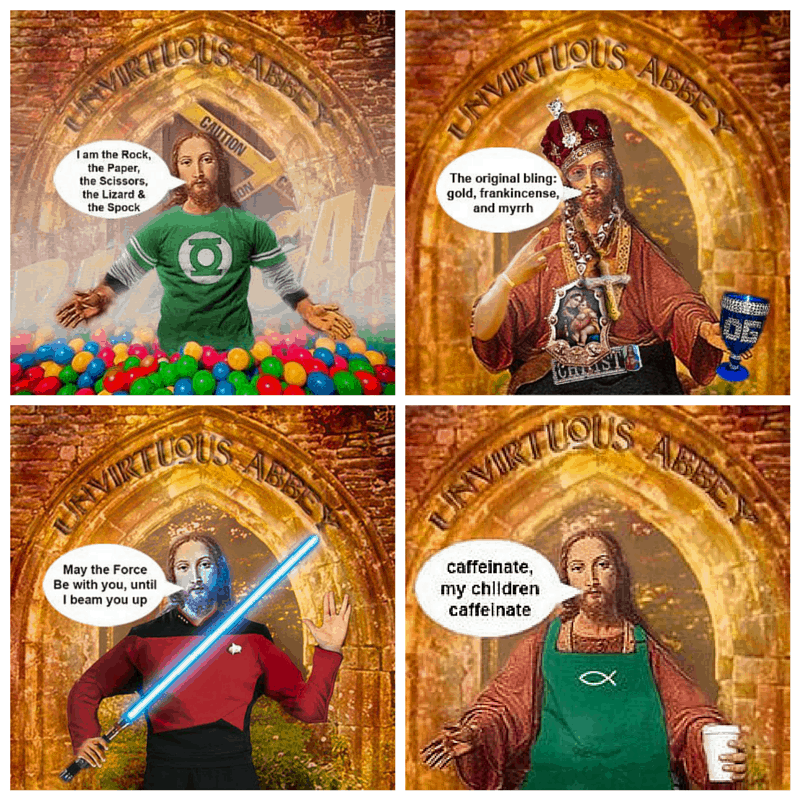 What advice would you give to local congregations on how to minister to the generation, specifically those who have only known a world with smartphones and social media?

It’s a matter of perspective, isn’t it? There was a time when pipe organs weren’t allowed in church because they were thought to be distracting, so people sang acapella with the Psalms. A few hundred years later and we still can’t get rid of them! ☺
A few years ago, I was asked to leave my table group at a church conference because I was tweeting. (I was tweeting what the speaker was saying.) The person said, “You need to put THAT away.” What I find ironic is that the church often talks about the “Communion of Saints.” That somehow in the past, present, and future we are all in this together. And yet, when the saints happen to be on social media with you, we aren’t so open-minded.

Are you as snarky in your church pulpit as you are on Unvirtuous Abbey?

During my first sermon of my current church, I quoted one of my favourite theologians, Homer Simpson. A family complained. They thought it was awful. If I quote Homer Simpson as Unvirtuous Abbey, it gets retweeted fifty times.

The monks at Unvirtuous Abbey share nerdy church humour with me. One of the most-retweeted prayers at the Abbey is, “For those who are living on a prayer. Take our hand. You’ll make it. We swear. Amen.” That prayer only works if you know who Bon Jovi is. It would fly over the heads of most of my congregation.

Thanks for being with us today, Aaron, allow me to bless you with one of your own prayers:

Five Reasons Christians Should Do Comedy

Too Smart to be Christian