I have lived many years overseas among expats, and have amassed a collection of joke fodder found in cross-cultural communication mishaps. As a bilingual person, it is often easy for me to step in as a translator, but sometimes it is just fun(ny) to watch people stumbling to get by. The best is when the frustrated American, in his earnest attempt to get the other party to understand him, begins to repeat his phrase each time with increasing decibels. A mixture of compassion and glee rises in me as I watch the timid Chinese speaker shrink from the shouting American, no less befuddled than when he spoke at a normal conversational volume.

Easier said than done, of course.

The main function of language is the incredible power to connect with others. Long before a baby utters her first word, we speak to her and she coos in return. We speak in order to build meaningful relationships. Our words can touch: they can heal, they can hurt, they can bind. We cannot underestimate the importance of language.

As a bilingual person, I am constantly switching my languages according to my audience. Living in Taiwan, I speak Chinese to function in society, but seamlessly transition into English in the comforts of my own home with my English-speaking husband and kids. The contrast between two languages is stark, so it is apparent when I make my switch. But monolingual people, whether consciously or not, are also making deliberate choices to change languages according to context.

Not everyone does this well, but a socially adept communicator learns to use appropriate lingo at work or in the home or with neighbors; whether they are interacting with children at the playground or with the telemarketer on the phone. This kind of linguistic finesse is worth acquiring not so much to become manipulative, but so that we can connect meaningfully with our conversation partner.

You cannot assume people are ascribing the same meaning to your words. 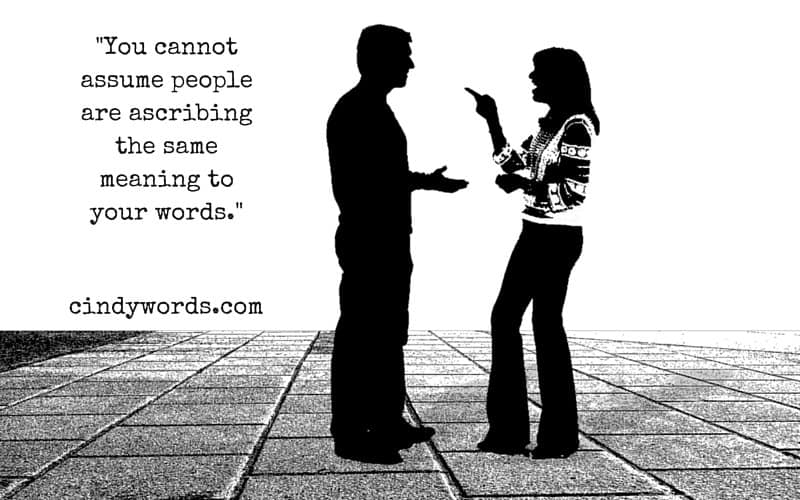 The basic gospel message contains words like God, Jesus, sin, saved, born again, salvation, heaven and hell – all of which mean a myriad of things to those who did not grow up in evangelical subculture. You can be Shouting American and speak those words loudly and repetitively, but you will still not reach your conversation partner unless you learn their language.

The problem, of course, is that it is easier said than done.

The haste to evangelize is detrimental to the evangelical cause because urgency undermines the slow road to learning someone else’s language.

Although English is still a dominant language of power, the global economy is trying to adjust to the changing climate, introducing immersion preschools and encouraging foreign language learning. Similarly, the evangelical Christian culture is losing ground in many areas in the West, so it is crucial that Christians adapt by learning the languages of a pluralistic society.

What do people mean when they speak of God? What worldview are they operating from? What thinkers and influencers have shaped their ideology? What is meaningful to them, what nourishes the deepest parts of their humanity? Which values define their lifestyle and how do they live out those values? Which community do they belong to and what rituals do they practice?

Learning the language of the other is a much more effective way to communicate than shouting Christian lingo at them.

To be clear, I am not condemning Christian lingo and the language of evangelical subculture. I am of the belief every language contains profound beauty. But only in that it is a conduit for meaningful relationships. Within Christian culture, Christian language is essential and sacred to build each other up and nurture shared space. But as soon as you venture outside of that intimate circle, anytime you begin to speak in a public sphere, Christian lingo turns into an identity marker, a boundary line that can easily alienate those who perceive you as speaking a foreign language.

I see a lot of shouting Christians, online and elsewhere. I think there’s this prevalent idea that boldly proclaiming one’s faith is a virtue and somehow glorifies God. And while I think it is important for each of us, Christian or not, to claim a right to state our convictions, our best hope of compelling others towards Christ is to stop shouting.

Remember there are many other languages, and we only earn our right to connect with others when we have learned to respect their values, learn their history, appreciate their culture, and speak their mother tongue.