It’s deja vu. Three years ago, we sent Lizzy to Chinese preschool in Tianjin. It was a completely local, Montessori preschool just like the one Hayden is going to now. At that time, our plan was to send Lizzy straight through the local system until perhaps 2 or 3rd grade so she can have a solid foundation in Chinese. However, after two years of observing her and sensing how she is not thriving, we pulled her out and sent her to the International school. Now, with Hayden going to a local preschool, I’m sensing similar struggles and challenges we faced with Lizzy.

The main issue is of course, culture. From the core worldview to the physical manifestation in the material world, Chinese culture is different from the West. This is not a subject I can even graze on in my simple blog post, but to present some of my observations from the experiences of my English speaking son (and daughter) going to a local Chinese preschool.

1) The authority of the teacher. In the West, teachers and educators work closely with parents as a “supplement” to the education and general well being of a child. Here, teachers are given much higher authority and role in a child’s life. Many of the children are in school many more hours than they are at home. Many Chinese adults testify to the immense role (be it positive or negative) teachers have played in their lives as students. Students are expected to respect the authority of a teacher. Parents are also expected to respect the authority of the teacher as the “expert” in their child’s life.

But it creates conflict and tension when two cultures rub up against one another. I, with my western education (and let’s face it, one who struggles a bit with respecting authority), don’t respond well with having the teachers tell me what is best for my child.

2) Individual verses corporate nature. From a very young age, western little kids are encouraged to be little individuals, entitled to their own opinions and expressions of creativity. This manifests in the way kids are encouraged to make choices from everything including what color underwear they want to wear to the methods they want to go about creating a craft project. Chinese little kids are taught and encouraged to behave and act like others in the community. Children are expected to wear similar clothing, and perform activities exactly as they are taught.

When Hayden was introduced to an activity which involved clipping clothespins to a basket that had tapes specifying where to place the pins, he picked it up right away. At first, he placed the clothespins where it was marked. But then he started to explore and place it in different places, and then he started clipping them with each other. From my western educational perspective, I believed it was good for him to explore and try new things. But he was reprimanded by the teacher and told to start over and clip the pins at exactly the places marked for him.

Again, it’s not right, it’s not wrong, it’s just different. It irked me that the teacher reprimanded him for that, but it’s not wrong to expect kids to conform to a set of rules and become like their community. In many ways, we want our kids to become like us, especially in our Christian character (whew, that’s a scary thing to say!).

3) Use of material resources. Chinese people, in general, are a lot more “frugal” in their stewardship of material resources. From a young age, we are taught to not be wasteful. Before each meal at preschool, the kids pray to thank God, thank the farmers (for growing the rice), and to thank Wang ma ma from the kitchen for making the food. Then, they are expected to completely clean their rice bowls. Wow, what a standard for our very picky Hayden to uphold! He had to eat mouthfuls of his most hated bean sprouts at school lunch today.

4) Language. This is pretty self explanatory. Hayden can understand simple Chinese but normally doesn’t ever speak in Chinese. We are hoping he will pick it up quickly, but for now, he’s just mute at school. (three years ago, Lizzy was mute for two years before we decided enough was enough) Although the teacher reports to me that when he’s frustrated he screams. It’s kind of like he has reverted back to toddlerhood before he learned to speak any language, he expresses himself by screaming.

Overall, though, he’s done really well. He was happy when I dropped him off at school this morning, and comes home fairly happy. We’ll see how it goes. 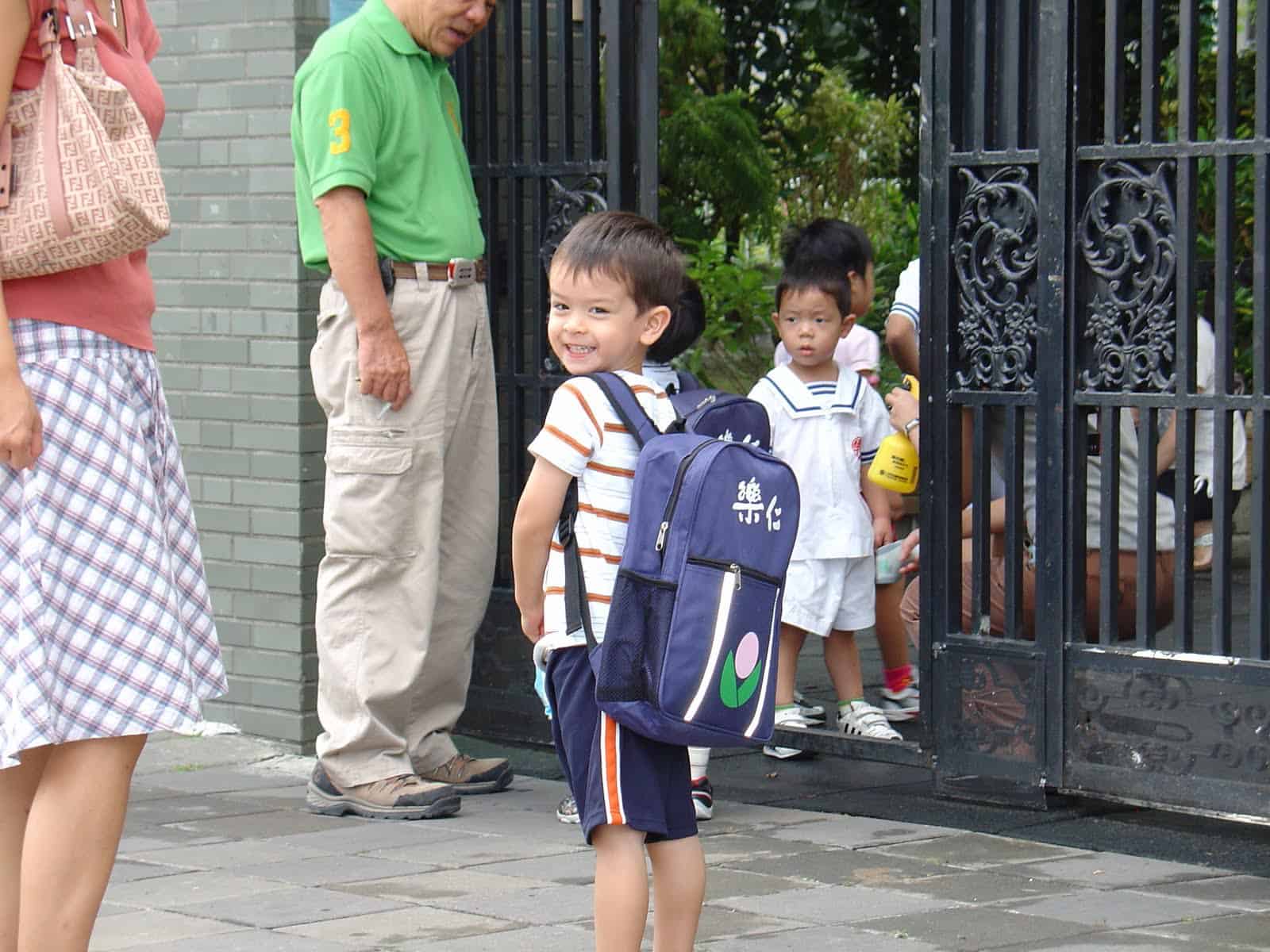 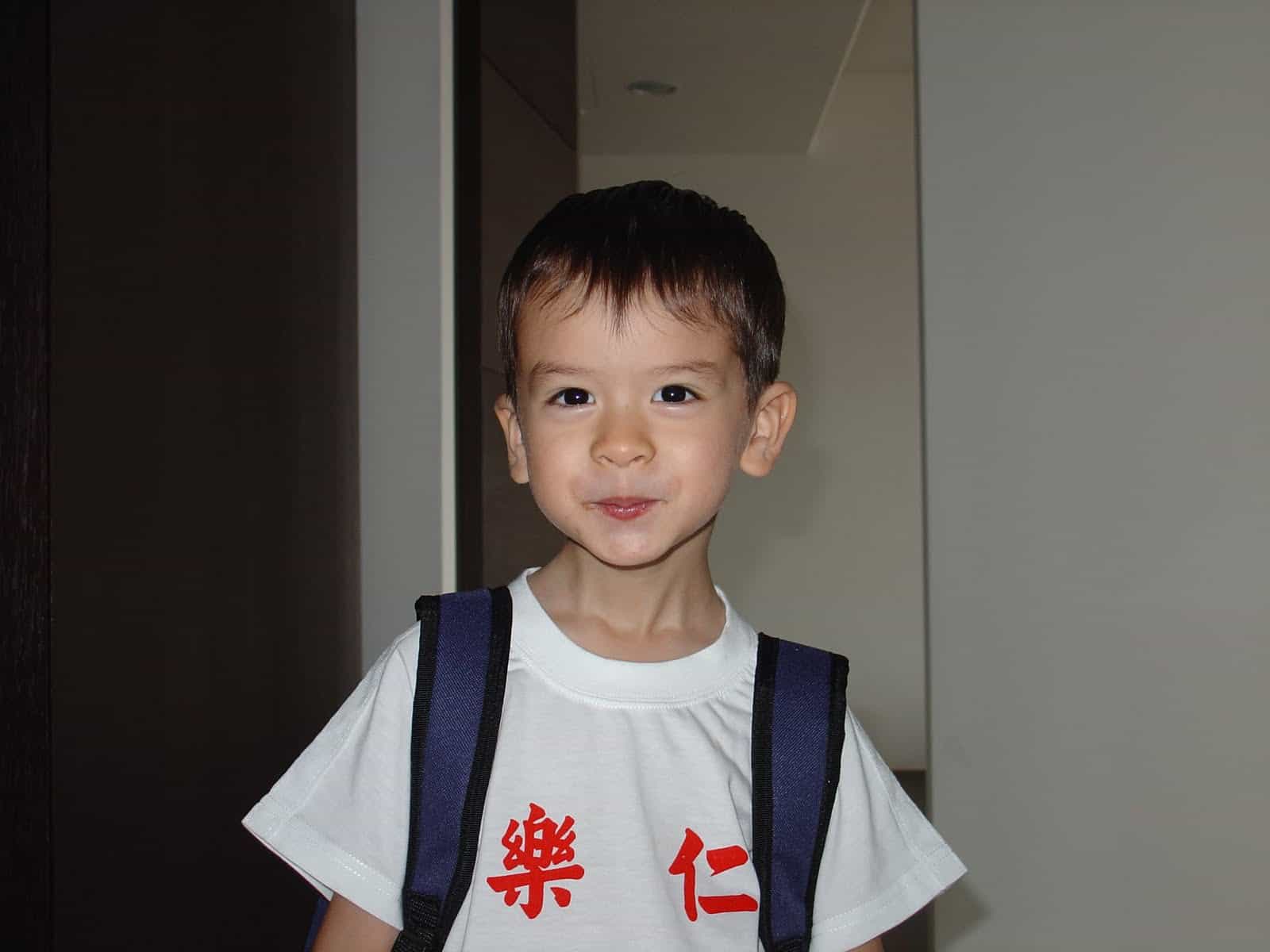