My hands and feet got cold and clammy. My knees became a bit weak and I felt faint and on the verge of passing out.

This was BEFORE I gave blood for the first time today.

I was one of those kids who was deathly afraid of needles. My mother wrote notes citing religious reasons getting me out of mandatory vaccinations at the public schools in Taiwan. The phobia of needles, like all phobias, is an irrational fear. For me, it’s the idea of a foreign sharp object puncturing my skin that induces severe panic. I have been known to pass out, blabber endlessly to nurses, and sweat profusely in the event of an upcoming shot. I have always gladly preferred severe pain multiple times the prick of a shot even knowing it would alleviate the pain.

That is, until labor. Labor pain was what it took for me to overcome my fear of needles as I gladly accepted the shot of epidural in my back to save me from hours of hell on earth. (Apologies to hard-core natural birth mommies, you do your thing, I’m gonna tell it like it is.)

I have always promised to donate blood if I ever overcome my fear of needles. Years have passed since I gave birth to my two children but I still haven’t gotten around to doing it. Good intentions, it turns out, can be easily delayed. I was out running an errand today and drove past a big red banner asking for blood donations to replenish a rapidly emptying blood bank. My human decency puffed out its chest and declared this the day I fulfill my promise to society.

I came home to prepare lunch for the family and decided to use a two hour window between lunch and a later engagement to go donate blood.

I walked up to the registration table, feeling very much like a hero, but with a dose of fake humility mumbled, “I’d like to give blood.” I expected the workers to be wowed by my selflessness and profusely thank me for my charitable gesture. They did not. That’s okay. I fill out the forms and was directed up to the 6th floor of the building.

I was greeted by large floor to ceiling automatic glass doors decorated by red heart decals. Us Taiwanese excel at cutesy heartwarming graphics. Hello Kitty, anyone? I was asked to take a number even though there was only one other man there. They sent my completed form in with my number and instructed me to eat some crackers. For some reason, I brilliantly decided to not eat lunch until after I gave blood. Clearly, I’m a virgin blood donor. I chow down nervously on my crackers and texted my symptoms to my family on the smartphone.

“Haven’t given blood yet.”

Five minutes later, they called me into a tiny little cubicle closed off by yet another automatic sliding door. A nurse asked me a litany questions concerning whether I have been involved in sexual work or suspect I might have contracted HIV. I understood the reasoning behind the protocol, but I feel a stab of sad for people whose answers may differ from mine.

Then she casually tells me she will prick my finger to check my blood flow. I don’t really get why they need to do that. A surge of panic rises as I had not expected this extra prick. I had no time to waste in calming myself back down, taking several deep breaths and reminding myself I can handle a small prick in the finger.

It wasn’t bad at all – tiny prick. She squeezes my finger and guess what, my blood flow was just fine. Blood came oozing out then it started to hurt! Ow, ow, ow, what in the world?! I started cursing under my breath, in disbelief a little prick on the finger could hurt so much. This did not help my panic attacks as I started to sweat again, followed by chills from sweating in cool, wet, winter Taiwan.

She sent me out to the waiting room again – a few more people had trickled in. I craned my neck to see what the room looked like where I would actually give blood, checking out the scene. There was a large sign asking people to “check in” on facebook, which I dutifully did. 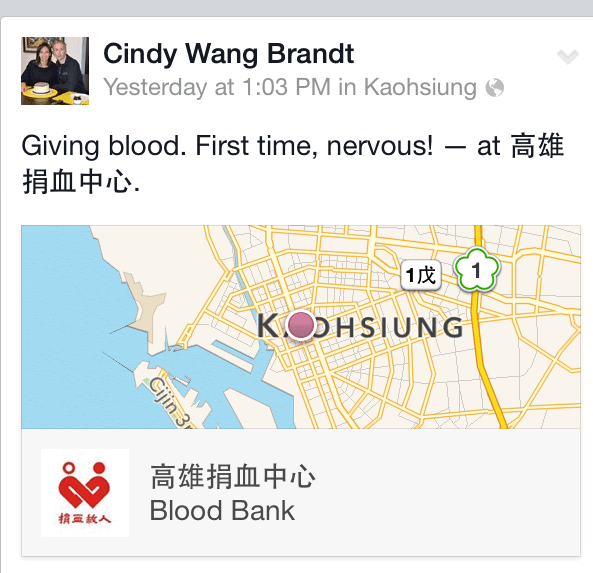 Behind the sign were two rows of big, cushy, black automatic reclining LA Z Boy chairs with a station of medical supplies situated nearby. They try to make things as comfortable as possible for blood donors.

Finally, they called me in and sat me down on one of those comfy chairs. I stretched out my arm and they tied that rubber stringy thing on my upper arm, like SUPER tight. I thought to myself, “is this necessary?!” Then they patted my arm looking for the vein and determined it was apparently too thin for blood extraction. So I had to switch to a chair on the opposing side so they can draw from my left arm.

The way I cope with needles now is I try not to look at it. I can handle the minimal pain, it’s not the pain that bothers me, it’s the sight of the needle. I exaggeratedly twist my head as the nurse began applying the brown disinfectant alcohol on a huge swab of my inner elbow and she warns me as she was about to insert the needle. She was very professional and the pain was minimal. However, I made the mistake of deciding to look at the needle after it was in, thinking maybe I can get over it. BIG MISTAKE. The needle was MASSIVE. I don’t even know how she got that thing in me, it is a HUMONGOUS needle in my fairly thin arm. I felt nauseous immediately. Mercifully, they proceeded to place a piece of gauze over the needle, I assume so donors DON’T HAVE TO STARE AT THE HUGE STICK IN OUR ARMS.

It did not help matters that I could actually feel my blood gurgling out of me during the process. For someone queasy (obviously) in hospital-y stuff, I was feeling very uncomfortable indeed. Ten minutes, they told me it would take, so I tried to occupy myself by playing on my phone, all the while trying to ignore the foreign object sucking blood out of me.

After it was over I did feel faint for real. Which I hear is normal. But I drank my free juice and rested in the comfortable recliner until I was ready to get up. I asked to take a picture of my blood of course, so proud I had done a good deed. 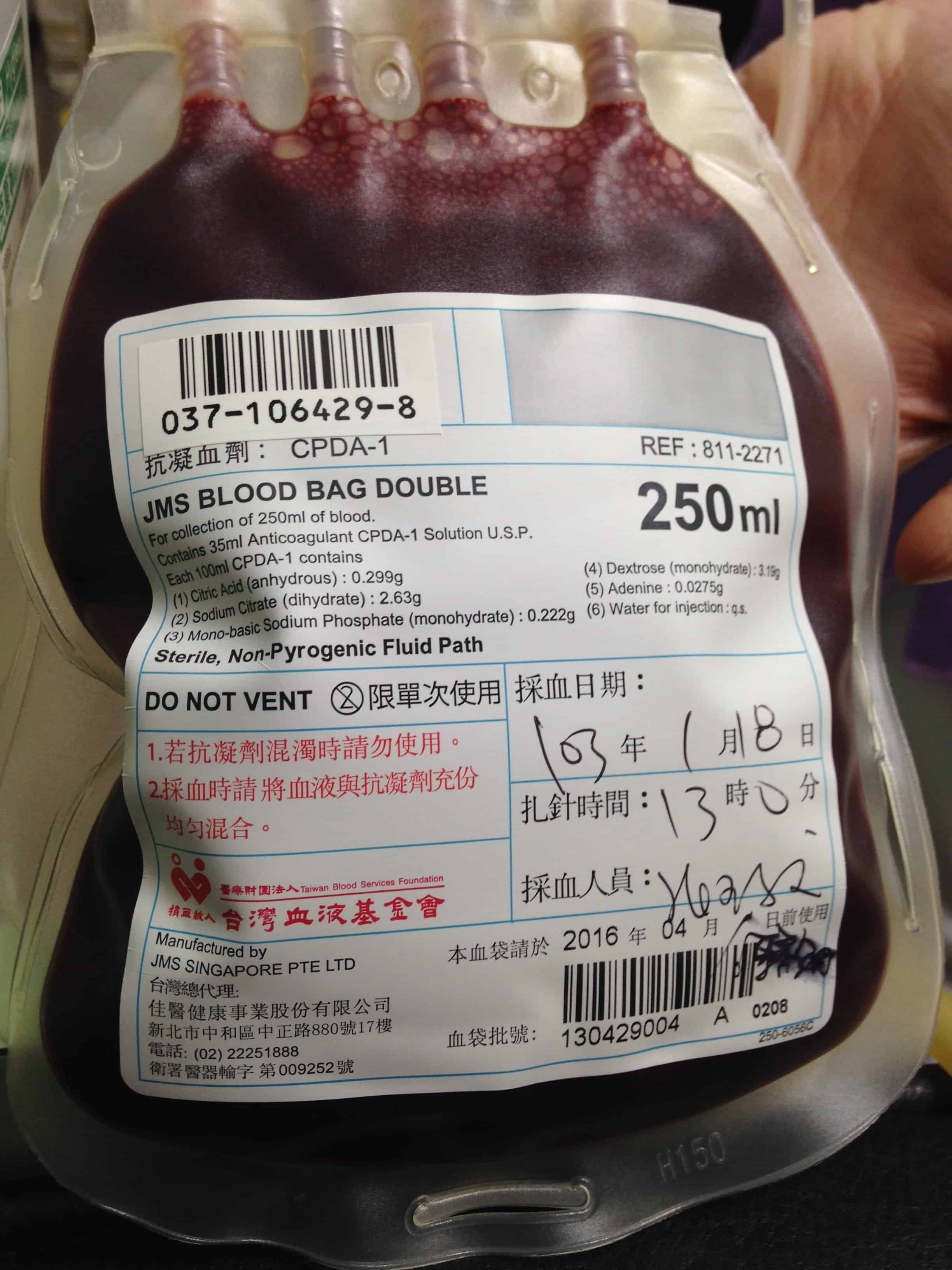 Weird to think someday, someone out there may have my blood coursing through their body. I imagine if I were to bump into the person, my heart would skip a beat, recognizing her product flowing nearby, and we would make casual but meaningful eye contact.

Have you ever given blood? Do you agree, or not agree, that the needle is extremely large?