This is my 12th Thanksgiving to celebrate with my American family. It is bizarre trying to create a family tradition I did not grow up with. I am Chinese and I don’t really like turkey, unless it looks like this: 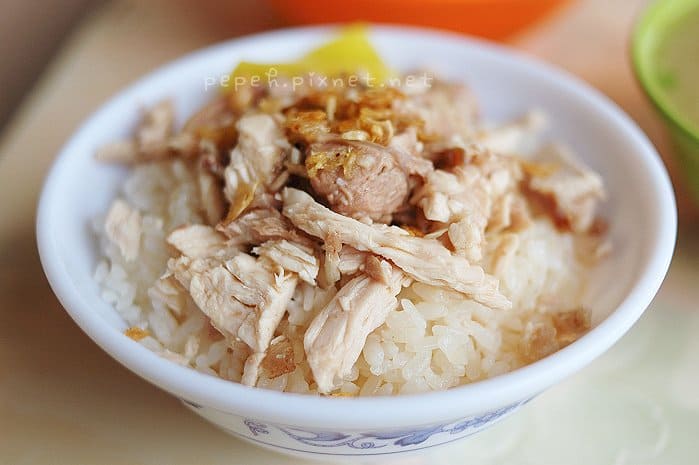 This is what I DID grow up eating – traditional Taiwanese cuisine – turkey rice, and it is YUM.

Having no childhood nostalgic memories to draw from, I have hosted years of Thanksgiving celebrations in my home with my American expat friends. Make no mistake, expat Thanksgiving is not the same as American Thanksgiving. Things taken for granted in American stores, such as turkey, green beans, sweet potatoes, French’s fried onions, pumpkin, cheese, cranberries, marshmallows, and crisco (for pie) are all somewhat exotic ingredients in our parts of the world.

I’ll never forget the time I brought home a big block of what I thought to be white cheddar cheese and upon shredding, discovered it was in fact a block of BUTTER. Hmmm, greasy.

Here are some things that have appeared on our Thanksgiving table in the past years: Sha-Guo-Li Ribs substitute for turkey (a hole-in-the-wall restaurant in an alley of Tianjin, China serving up the most mouth watering, tender, juicy ribs you have ever tasted. Except better, and with more fat), KFC fried chicken substitute for turkey, crunchy green bean casserole with sauteed onions (not the same as French’s) and sweet potato casserole with colored marshmallows melted on top (tacky presentation, but all I could find). When imported turkey emerged to satisfy the small expat demand, we had to deal with the oven conundrum. US sized ovens are just not readily available in Asian countries where our cooking happen in a wok on a stove rather than in ovens. Emails were sent, calls were made in a mad scramble to find the smallest turkey to fit in whoever owned the biggest oven. Then of course, transporting the bird in the frigid cold on bikes became another obstacle to overcome in order to recreate some semblance of home during the holiday season. Bless these American hearts.

Expat Thanksgivings are a season of hospitality. Living away from the homeland means away from relatives so friends stand in as family. Like the substitutes for turkey, the flavors may be different, but it’s not any less enjoyable. Makeshift families open up the way to creating new traditions, new friends, new meanings of home. Children away from grandmas are loved instead by aunts and uncles from a different sort of family. Expat Thanksgivings may have missing ingredients (sometimes we just have to do without the almond extract), but a lot of additional flair. Whether it’s rice balls from the Chinese guest, or German games introduced by friends who hail from that country; Thanksgiving can sometimes look less like an American holiday, and more like an excuse for expat friends to gather and celebrate. And everyone is reminded holidays are never meant to be exclusive events, but an opportunity to invite others in to learn our story, be shaped by a different perspective, and honor all with food, drinks, and good old fashioned laughter.

Though I did not grow up celebrating Thanksgiving, I have come to treasure these annual rituals of my married life as new traditions of my own. I have been grafted into the cultural story of my American family and it is a beautiful thing.