Everything I Learned at Fuller

*Today I am picking up the Faith Shift blog series, where I unfold my own story of faith shifting as laid out in Kathy Escobar’s book, Faith Shift. Last week, I talked about fusing my faith, a time in my life when I found security in the certainty of my faith, and the gifts evangelicalism gave me. Here is the second part of my story:

I found a good Christian man at a good Christian college and got married at a ripe young age of 22. We were passionate (for God, of course, what were YOU thinking?) and on fire and ready to go change the world for Jesus. So far, I was still right on track to living a #Blessed life in the Lord. We decided to go to seminary to get equipped before a life of ministry and ended up at Fuller Seminary in Pasadena, California.

Depending on who you speak to on the theological spectrum, Fuller Seminary is either a fundie cult or a cauldron of bleeding heart liberals. Which meant it was the perfect middle ground to begin stretching our theological boundaries. It was there we learned it’s possible for non-evangelicals to still be considered Christians (gasp!), that a respectful reading of Scripture did not mean imposing a reactionary catchphrase like “inerrancy” on it (gasp!), that we can and should dialogue meaningfully with other religions (gasp!!), and that our Christian faith goes far beyond fighting culture wars such as abortion, creationism, and homosexuality (gasp!!!).

My favorite professor at Fuller was a strong woman of God and an intelligent scholar of Scripture. I saw in her how I can become a woman who engages critically with the Bible and theology, and that my gifts can be valued every bit as equally as my husband’s.

The twin towers fell during our first semester at Fuller. It was there we sat at the feet of a leading Christian scholar of Islam and Christian ethicist who painstakingly shaped a critical lens for us to view the event, challenging us to think through what a Christ-like, nonviolent response might look like, and warned of the dire consequences if we should capitulate to the power-hungry, war-mongering response of an empire. Now fifteen years in hindsight, I see the rise of ISIS as a tragically grim classroom case study demonstrated in our conflict-laden world.

At Fuller, we learned to care for the poor, steward our environment, engage racial inequality, and champion the cause of the oppressed.

To sum up, we were taught the whole gospel.

It slowly dawned on me how the gospel I had fused into was only a shadow of the real thing. I had been shortchanged with a truncated gospel. 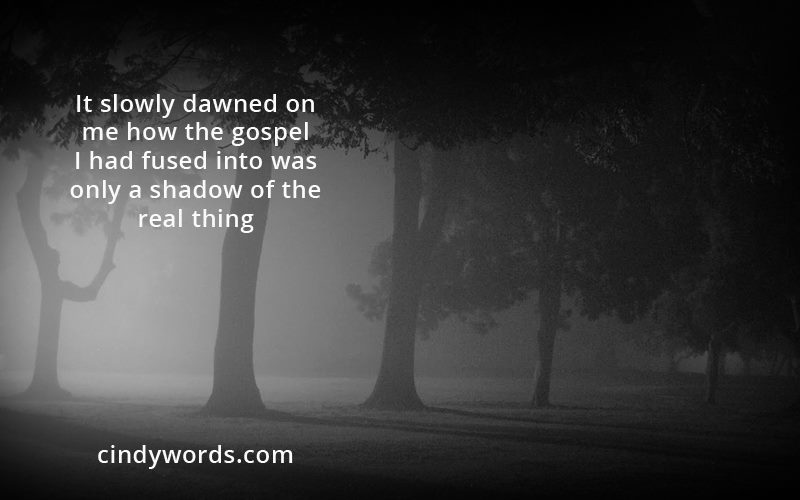 Thus far, I have described an intellectual faith shift. On a spiritual level, I was starting to react viscerally to every small dissonance I was experiencing as we headed out into the mission field. The most personal and poignant issue for me was how differently I was treated as a woman in ministry, as people kept asking my husband to lead and teach and preach, while I watched on the sidelines asking myself if I was crazy to remember that both he and I had just gone through the exact same training together in seminary and yet I am not asked to steward my education in the real world.

Kathy says, “During shifting, most people maintain some semblance of what they did before things started to change.” On the surface, I was still the same person, trying to raise a godly family, leaning deep into ministries of hospitality and service on the mission field. I led Bible studies and prayer groups and attended evangelistic outreach projects.

But beneath that exterior, the small dissonant jabs were snowballing into a jumbo-sized aggravation. I felt suffocated. Like the small, partial, shadow of a gospel I was first converted into, I was limited to being a small woman. I had big dreams but no space or community to flesh them out.

Just as Kathy says in her book, once a person begins the process of faith shifting, many church systems cannot handle it. Certainly, for me, the missionary community was not a place to wrestle with my questions, skepticism, and disenchantment with the status quo. I began to question whether committing to a vocation of converting others was the most faithful way to be Christian.

We left the mission field for many other reasons. But once we left, I felt more free to address all the discontented grumbling deep within.

Kathy says at the end of faith shifting, sometimes people return to the certainty of their fused faith.

they unravel—they “deconstruct deeply held beliefs, practices, and ways of intersecting with God, others, and even ourselves… It’s where our faith really comes undone.” In other words, it’s the faith shifting phase where shit hits the fan on high speed.

And boy, did I take the latter path.