Child Abuse in the Near-Sacrifice of Isaac 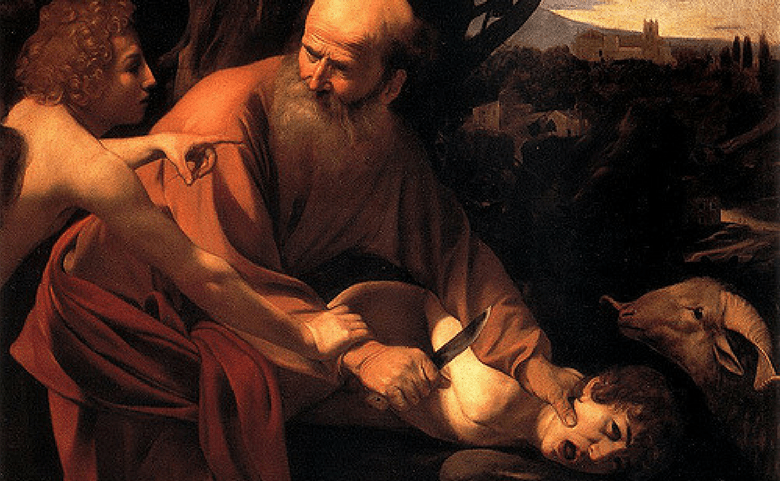 “The history of childhood is a nightmare from which we have only recently begun to awaken,” says psychoanalyst Lloyd DeMause, who has uncovered extensive research that reveal pre-20th century, every single parent child relationship would be prosecuted for abuse and neglect.

Infanticide, abandonment, child battery, violent exploitation were socially and religiously sanctioned for much of human history. One case in point, it wasn’t until the late 16th century that church reformer Martin Luther advocated against a common infanticidal practice of drowning mentally defective children. Even so, Luther preached children were “instruments of the devil.”

It wasn’t until the 20th century that children began gaining strides in human rights, and not until 1959 were children declared equal rights as humans under the UN’s Declaration of the Rights of the Child.*

All this is to say, we are turning a systemic tide that has violently harmed children for thousands of years. Any pretense that as human beings we are wired towards sentimentality and innate protection of children, is debunked in the face of history.

It is our moral imperative to continue advocating against child abuse with vigilance over complacency.

With this perspective in mind, let’s turn towards one of the most problematic passages in the Bible: the story of the near sacrifice of Isaac in Genesis 22:1-19. In the text, God commands Abraham to sacrifice his son, Isaac, as a burnt offering. WITHOUT QUESTION, Abraham obeys, taking his son, lays him on the wood altar, and gets ready to stab him TO THE DEATH in preparation for the ritual. The voice of God comes from heaven and stops Abraham just in time, praising him for passing the test of faithfulness, that he would give up even his beloved son for God. God promises many blessings. End scene.

This is horrifying. The only reason I can believe Christians read this passage without flinching is because we also plaster the story of genocide in our baby nurseries (re: Noah’s Ark). Attempting to MURDER your son, even if your intentions are the best of religious devotion, DEFINITELY warrants a call to Child Protective Services—it is child abuse without question. Even if no physical harm came to Isaac in the end, no doubt he suffered severe emotional trauma and lasting damage to his relationship with his father.

Okay, you might object, no one is hauling their children on altars and knifing them today, why are we dwelling on this? Unfortunately, although the narrative is far removed historically from Christian communities today, I still see the teachings implicated in the text continue to harm children, and as such, it is worth calling out.

First, a hierarchy of love. Growing up evangelical, I experienced this hierarchy as we were taught to love God above even our family, that radical obedience sometimes require we sacrifice family relationships. In ministry and missionary vocations, I witnessed families who did precisely that—sacrificed their children’s well-being in order to serve their calling to the field.

Not only in parent-child relationships, hierarchies of love were applied to adult relationships as well. Spouses were encouraged to “love Jesus more than their husband/wife” and parents should prioritize their marital relationship over parenting their children. It fits into a fundamentalist paradigm of authoritarianism and renders families incapable of growing in mutuality and healthy spirituality. If you love God over your spouse, then you are off the hook from listening to how you can serve one another deeper. One can always trump the other with the God-card.

Furthermore, if you are supposed to love your spouse more than your children, then you miss the opportunity to invest into the childhood season of your parenting without guilt. Love leans into the particular demands and desires of each party at any given time. Love does not have hierarchies. Love freely gives to all, without competition.

Second, erasing the child. In the narrative, Isaac is used as a pawn to test Abraham’s faithfulness. The story is not told from the child’s perspective, his need for love, security and connection is completely unacknowledged. Much of Christian parenting literature today still espouse that a child should be seen and not heard.

Christian parenting advocates for first time obedience, which silences a child’s autonomy for dissent. They require children to respect parents without equivocating respect, and punishes misbehavior with physical violence or emotional shame in order to coerce children into compliance. The brutal act of sacrificing a child on the altar has morphed into subtle diminishing of a child’s rights to personhood.

The sadistic test of faithfulness in the story of the near sacrifice of Isaac can be misused to perpetuate terrible harm to children today.

There are folks who attempt to solve the hermeneutical tension in this text by 1) placing the narrative in its context and 2) treating it as metaphor. As I’ve mentioned, infanticide is largely accepted in antiquity, perhaps people in the biblical context wouldn’t have bat an eye at a story about the near sacrifice of a child. But just because it was okay back then doesn’t make it okay now or ever.

Patriarchy, slavery, and other practices were endorsed in biblical times, but it doesn’t excuse us from interrogating it and calling it out as abusive. Those who insist upon elevating the morality of the Bible over human decency is part of a huge problem. When orthodoxy trumps human lives, you’re choosing toxicity with religious arrogance.

Treating the text as a metaphor still doesn’t let it get off the hook. The moral of the metaphor remains: one should have faith in God even at the expense of a child’s well-being. It doesn’t in anyway, excuse the child abuse inherent in the story, literal or metaphorical.

So what then? How can we read this story with a care and concern children deserve? First, I would suggest avoiding this story altogether with young children, because human sacrifice is potentially traumatic for impressionable and imaginative little minds. File this under the rated R section of Bible stories.

If the story comes up with children, be unequivocal that this was abusive to children, and that you, as a parent, would never make the choice Abraham made. Tell them  love has no hierarchy, and orthodoxy never matters more than human lives. The problematic text in Scripture is OUR adult problem, not a burden for a child to bear.

As adults with matured cognitive processes, we can engage in more nuanced and comprehensive readings of Scripture. We can allow for problematic texts to stand as it is. Yes, it is paradoxical and contradictory to the nature of a good and loving God, but we should be able to handle dissonance without sacrificing moral imperatives to protect the vulnerable. Just let it stand like an uncomfortable elephant in the room, but fiercely guard our children from violence.

We can allow compassionate texts, even within the nearby verses in Genesis 50:21, where Joseph promises to take care of little ones, to override the harmful texts.

We can look at the larger trajectory of biblical teaching towards liberation of marginalized and let that inform our ethics.

But perhaps my favorite solution is to simply let a child interpret the text. Here’s what happened according to an Episcopal Lenten calendar reading:

One day, I didn’t turn the pages fast enough. “What’s that story?” my son asked.

It was the sacrifice of Isaac. “We’ll read it another time,” I hedged. “I don’t like it.”

This piqued his interest so I took a deep breath and read.

When I finished, my son nodded. “So, Abraham was really old, right?”

“Well, sometimes when people get old, they get…confused.” My son remembered the Alzheimer’s floor when we caroled at a nursing home.

“So Abraham thought God was telling him to do something mean, but he was wrong. He was confused. And God stopped him.”

I didn’t argue. Without the beginning, this made sense. I liked my son’s conclusion. Instead of hiding parts of the story, maybe I could let my child explain them.

This child knew, with his conscience and logic and compassion, that the act of the near sacrifice of Isaac is wrong.

And he’s right—we should listen to him.

*I drew from the work of the following books for this piece:

The Child in the Bible
Parenting for a Peaceful World

Sign up for my parenting newsletter and get the four alternative spiritual laws:
http://eepurl.com/cMmHmD