I am more and more convinced that beauty lies in the margins.

Raised in evangelicalism, we often prayed to reach those who remain in the darkness, that God would open their eyes and see the truth. We had been born again. A veil had been magically lifted off our eyes, welcoming us into the land of all that is bright and right. Like the blind man in the gospel of John, we proclaim, “I was blind, but now I see!” Those who believe now possess some sort of special knowledge inaccessible to others and we are tasked to go and lift the blinders off as many as possible.

It sounds a bit arrogant, which has been a common accusation against evangelical Christians.  But every conversion experience is a form of turning from darkness to light. An a-ha moment, a lived miracle, a season of wrestling with doubt and crisis that somehow brought the person to a divine encounter with God. These stories ought to be honored and not dismissed. Something has changed and it is worth celebrating a liberation into hope. I marvel at genuine, earnest faith.

The problem is when we have become blinded by our light.

Barbara Brown Taylor, in her latest book, Learning to Walk in the Dark, tells the story of a French resistance fighter named Jacques Lusseyran. Due to a tragic accident at the age of seven, Lusseyran became permanently blind. Instead of raising him as a pitiful, blind boy, his wise parents empowered him to discover the world in a way only he could. He grew to know his surroundings intimately, miraculously describing objects around him with astounding detail. He could tell trees apart because they sounded differently, something a person with sight would never bother to notice because they can simply use their vision to differentiate between trees. Barbara Brown Taylor concluded after reading his memoir, “I was persuaded that I was the one who was handicapped, not he.”

And so it is with our eyes of faith. Without dismissing our conversion experiences of receiving sight, I am afraid in some ways we have become handicapped by our privilege of sight. 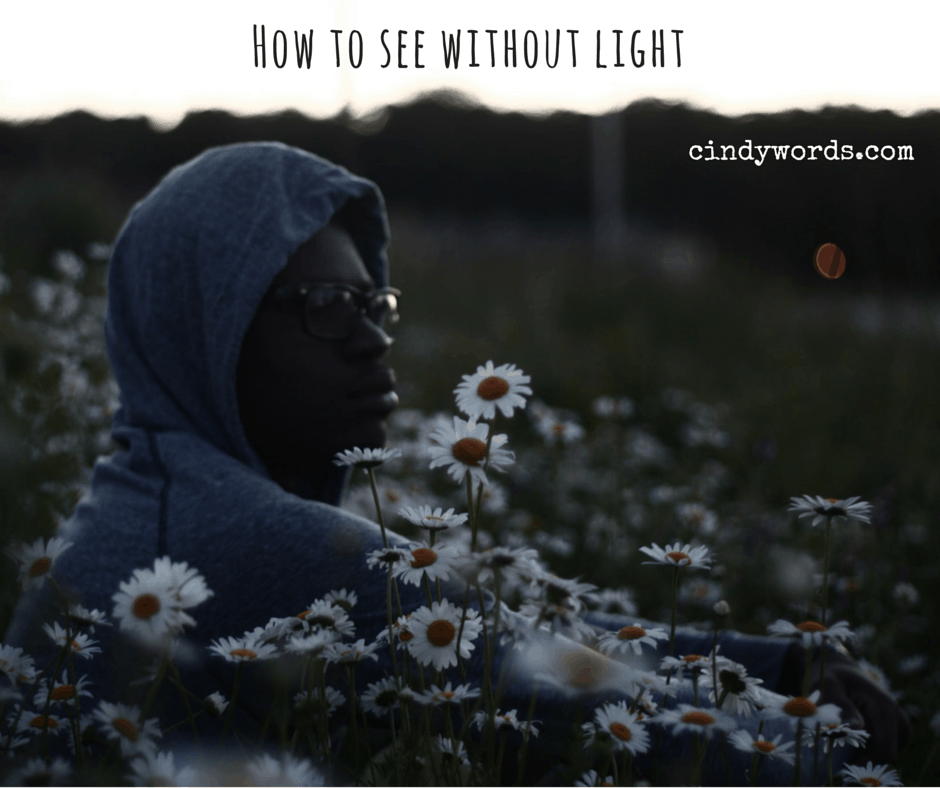 I am stunned by the unwillingness of certain Christians in positions of privilege to listen and believe the realities of those who suffer the oppression of racism, homo/transphobia, misogyny, and poverty. Scientific data, sociological statistics, and overwhelming numbers of personal anecdotes can’t stand a chance against the deep-seated narrative of the status quo. When one can see clearly between black and white, they dismiss the nuances and complexities of grey areas. When you are gifted with the privilege of sight, you lose the capacity to pay attention to how the oak feels against your touch, how the scent of the pine refreshes your soul.

Those among us who are crippled by disadvantage have learned to see the world in a way only they can see it. The people out in the margins have been trained with a keen set of senses. Their blindness have taught them to see in the darkness. The man with Aspergers detect patterns we don’t have access to. The refugee child smiles in spite of witnessing horrors. The impoverished mother develops resilience, fighting for nutrition to fill her breasts and nurture her infant. The black man speaks despite being silenced by bullets. The cynic and the doubter learns to limp through life with fragile faith. They glow with a mesmerizing beauty that shines in a terrible darkness.

I want to know how.

I think we had it wrong when we thought we were the ones to take off blinders, off of those who live in the darkness.

I think we are missing out on extraordinary beauty because our light has told us we already see.

I was terrified of the dark as a child. I am still terrified of the dark as an adult. But instead of the boogeyman under my bed, now I am afraid of violence, angered by injustice, agitated by ignorance, grieved by poverty, and sensitive to death.  Yet I am not sure there is much life without death. I’m not sure living in a prison of pretend reality, peace exchanged from oppression, weak optimism from denial of darkness, glamour at the cost of injustice is really living at all.

I want to explore the beauty in the dark recesses of our world. I want to talk with those outside of the spotlight, the unheard voices muttering in the dark. I want to settle in the shadows, push past the discomfort of blindness and adjust to seeing without sight.

My mission has changed. I no longer wish to bring light to those in the darkness.

I am asking if they’d teach me how to see without light.